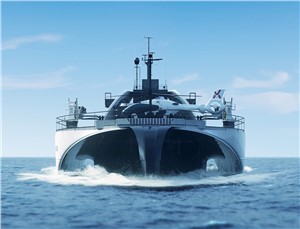 “PowerX will design and build an automated Power Transfer Vessel with a massive battery payload that is integrated with the ship’s controls to transport offshore wind power to shore,” the company said in a press release. “An undersea power cable typically requires expensive construction that comes with substantial environmental impacts.”

The Power ARK 100, the first model in the power transfer vessel series, is expected to be completed in 2025. The vessel will carry 100 grid batteries with 200MWh of power. The vessel will be able to travel up to 300 km while running only on electricity and can unlock long-distance transmission when powered by electricity and sustainable biodiesel fuels, the company said.

PowerX will mass-produce batteries for the vessels with the construction of a giga-scale assembly facility in Japan. The company expects annual production capacity to reach 1 GWh by 2024 and 5 GWh by 2028.

Tell a friend:
The Automated Vessel Designed to Transport Electricity from Offshore Wind Farms to Shore