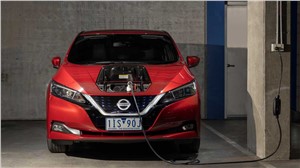 Owners of Nissan Leaf electric vehicles in Australia could start using their cars’ batteries to power their homes and feed back into the grid as early as the end of 2021.

Nissan Australia’s head of electrification Ben Warren said the company was awaiting regulatory approval for its bi-directional charger, which was expected to come in the next couple of months. That would allow the chargers to be ready for market by the third quarter of the year.

After that, Warren said Nissan Leaf owners would be able to participate in smart charging pilot programs, such as the AGL Energy-led vehicle-to-grid scheme open exclusively to Leaf owners, which provides the participant with a bi-directional charger and allows them to feed energy to the grid from their battery on wheels. It is also running a pilot with the ACT government, which has a fleet of Leafs.

“By the end of this year, our expectation is customers will be able to participate in the grid, be it through one of these trial programs or purchase the unit themselves and have it installed in their home,” he said.

Speaking at the Smart Energy Council’s Smart Energy Conference in Sydney on Wednesday, Warren emphasised the benefits of EVs beyond low emissions transport.

“The biggest secret in automotive industry … is people buy vehicles to park them, not to drive them. They spend most of their life sitting in driveways or car parks. which makes them actually one of the least efficent assets that we own, but with with electric vehicles we can turn them into one of the most efficient assets.”

That means charging up when demand and/or prices are low, and feeding the energy back into the house or into the grid when it is high. He said EVs should also be seen as much as portable batteries as means of transport.

“Effectively, you’ve got the world’s sexiest battery sitting in your driveway,” he said.

To unlock this promise, he said there was “a whole bunch of things that have to happen, and there’s technical considerations around how do we certify chargers and plug them into the grid.

“There’s the economical scenario about what does the business model look like for a car owner who wants to use this technology.”

Warren said Nissan in Japan was trialling a number of case studies, such as using EVs as replacement power sources during natural disasters, when grid-based power supply was down. Another trial was offering EV owners the option to pay for parking with electricity, rather than money.

Tell a friend:
Nissan Leaf Owners Could Start Feeding Energy Into Grid by End of Year