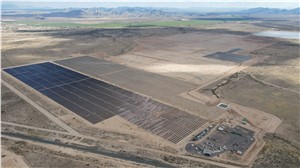 BOSTON, Feb. 15, 2021 /PRNewswire/ -- Longroad Energy Holdings (Longroad), a US-based renewable energy developer, owner, and operator, announced today the signing of the acquisition of Sun Streams 2, 4, and 5, which total approximately 900 MWdc in total solar capacity plus the potential for 1-2 GWh of battery storage.  Longroad also closed the acquisition of Sun Streams 2.  The closing of Sun Streams 4 and 5 is subject to regulatory approvals and customary closing conditions.

The projects were purchased from First Solar, Inc. (Nasdaq: FSLR).  Longroad will also power its Sun Streams portfolio with First Solar's responsibly-produced solar technology and has executed purchase agreements for 900 MWdc of Series 6 modules, of which 700 MWdc represent new bookings for First Solar.

Sun Streams 2 is being constructed by McCarthy Building Companies and is expected to be operational in June 2021.  Sun Streams 2 energy production is sold under a long-term contract.

Sun Streams 4 and 5 are development projects with target operational dates of 2022 and 2024, respectively.  Both projects are currently uncontracted and uniquely positioned to accommodate a variety of offtake structures, with or without storage.

"Arizona is an important location for Longroad as we seek to bring competitive renewable projects to power buyers in the Western U.S.," said Paul Gaynor, CEO of Longroad Energy.  "The Sun Streams complex is ideally positioned.  It is adjacent to one of the most significant power hubs in the desert Southwest and California, the solar resource is excellent, and we have multiple transmission options with direct access to CAISO and the Southwest markets.  We also have the ability to include a significant amount of energy storage capacity to make the assets even more competitive.  We look forward to bringing the rest of the Sun Streams complex to fruition."

The nameplate solar capacity of the three projects acquired by Longroad:

The Sun Streams acquisitions build on a growing presence in Arizona for Longroad, which already owns operating solar projects in the state as well as an existing development portfolio.  Longroad has launched the origination effort for the Sun Streams 4 and 5 projects.