Is This the Electric Vehicle Filling Station of the Future? 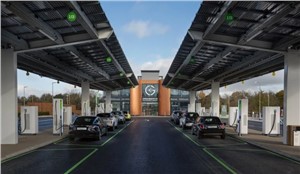 There are no pumps. You can rent a workspace. If you want, you can take an EV for a test-drive. There’s still coffee.

It’s not a filling station as we know it, but U.K. firm Gridserve’s first "Electric Forecourt" launches today, and with it, we get a bricks-and-mortar view of how EV charging could look and feel in the future.

It’s the first of 100 planned by the company in the next five years with the financial backing of Hitachi Capital behind it. All the power will come from low-carbon sources; Gridserve is also rolling out solar-plus-storage projects to ensure that this power is additional.

It differs from a regular gas station in a few key ways. It takes longer to charge a car, so there needs to be space for more vehicles, with the first site, located in Braintree, England, having space for 36 cars to charge. In addition to the expected retail offerings, groceries, coffee and magazines, there will be well-being spaces, office pods for hire — charging your EV won’t be an excuse not to stay on top of those emails — and on-site EV evangelists to tap for knowledge or take you for a test-drive in the latest all-electric vehicles.

“What Electric Forecourts are designed to do is to enable communities across the country to have the confidence to make the transition to electric vehicles, knowing that there's somewhere in their locality where they can absolutely charge as fast as their vehicle will allow,” Gridserve CEO Toddington Harper said in an interview.

Simplicity is key for the EV mass market
As the company looks to roll out the network, Harper said the goal is to target the mass-market mainstream.

“We focus on the 99 or 98 percent of people who haven't switched to electric cars yet,” said Harper, a veteran of the U.K.’s solar boom years. Gridserve has a strong mission focus to “move the needle on climate change,” so giving confidence to those people hesitant about going electric is a priority.

A more or less industry-low charging rate of £0.24 ($0.32) per kilowatt-hour backs that up. That equates to about £10 to charge an EV battery from 20 percent to 80 percent, according to Gridserve.

Gridserve is also launching an EV leasing business, it announced today, again bringing these notions of simplicity and low cost into play. EVs have lower lifetime costs because of the absence of fuel. The simplest way to lay that bare for consumers is a vehicle lease that includes free charging.

Gridserve is demonstrating the improvement with a hypothetical example of two comparable Mercedes. The electric leases come in about £15 cheaper per month upfront. But when you add fuel costs in, the difference is £177 per month. That’s a simple apples-to-apples comparison and a powerful tool to share with consumers.

Abhishek Sampat is a principal analyst for EVs and electricity at the consultancy firm Delta EE. He also worked for 10 years at automaker Jaguar Land Rover with an e-mobility focus. He expects a lot of Gridserve’s initial customers to be early adopters.

Harper said the environment they are looking to replicate is that of an Apple Store, a cool place to hang out with like-minded folks with access to expertise and the technology itself.

In that atmosphere, Sampat told GTM, early adopters could well take up a fresh lease with all-in charging. He likened the concept to a mobile phone contract, with fixed monthly payments for unlimited minutes, texts and data. Any additional charges will be exceptional ones.

Electric charging networks: Legacy versus greenfield
In addition to the 100 Electric Forecourts, Gridserve will also roll out Electric Hubs, clusters of six to 12 chargers on sites where the other services such as retail are already in place.

Gridserve is not the only player going after the public charging market, of course. Utilities including EDF are investing heavily, as are oil majors Total and BP, which are mainstays of the existing filling station market.

Sampat acknowledges that legacy players have the advantage of existing, visible and well-known locations. On the other hand, there are advantages to developing greenfield sites like Gridserve’s.

For one, “they can do their own analysis on where best to site them,” he said, which also enables them to co-locate with their solar-plus-storage projects. The revenue streams from those provide the opportunity to cover the costs of the Electric Forecourts while demand ramps up.

A lot of urban filling stations will also be limited by the local distribution grid. “A greenfield site you can start from scratch, no compromising.”

Consumers picking up EV signals
Last month the U.K. advanced the date of its ban on new gas and diesel vehicle sales from 2040 to 2030. Harper and Sampat have both seen an immediate shift in attitudes across the sector.

Harper said he had previously had to convince investors that EVs would eventually become mainstream. Some even insisted on seeing business cases from Gridserve based on there being zero use of the charging infrastructure, just in case. Harper said that scenario had now “evaporated.”

Sampat called it a “wake-up call” for companies that had been targeting 2040.

“[They have] to be more...upfront with any investments, any product strategy or plans they had. They've had to accelerate,” said Sampat. “It wouldn't surprise me [if] there are more finance and investment houses out there right now, looking to see what they could be doing now, instead of doing due diligence for a year or two, or five."

For Gridserve, the "if you build it, they will come" phenomenon is already panning out, Harper said. While doing final preparations on-site last week, a car quietly pulled into the then not-quite-commissioned forecourt and started charging.

“Our first-ever customer turned up and started charging, and we weren't even open,” he said. The driver in question was a local resident who had watched the building work take shape. He had been planning to install his own charger at home, but it had proven to be a challenge. Having a local facility gave him the confidence to take the leap and go electric.

“I was hoping that would happen,” said Harper.

Tell a friend:
Is This the Electric Vehicle Filling Station of the Future?