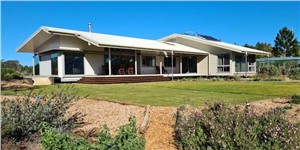 When Brisbane doctor James Emmett decided to build his dream house on Tamborine Mountain south of Brisbane, he chose Redflow batteries to make it as environmentally sustainable as possible.

In 2017, before even starting construction of the house on the 3.2 hectare former farming property, James installed two 10 kilowatt-hour (kWh) ZCell batteries to deliver power needed by builders. The system also included a Victron inverter-charger, a Fronius inverter, and 13 kWp of ground-mounted solar panels. An ultracapacitor was used to meet the power surges demanded by the builders’ larger drop saws.

When the house construction was completed a further two ZCell batteries were added to the system. Now, with the house built, he is reaping the benefits of off-grid living, with plenty of free energy to power his home as well as charge his electric car and electric zero turn mower.

James said he chose Redflow’s zinc-bromine flow batteries from the outset because of their durability and their temperature tolerance. “My reasons for choosing Redflow batteries were their heat tolerance and capacity to be at any state of charge without damage to the battery,” he said.

“I have no backup generators here, so the system has to do black starts occasionally. As an example, one night I left the car charger on by mistake and we got down to one per cent of stored energy in the morning before it started charging again when the sun rose. I like that I don’t have to worry about a full discharge damaging the battery whereas with a lithium or lead-acid battery, that could damage it.”

Built on a ridge 550 metres above sea level, the Emmett house is a substantial building with three bedrooms, an executive room and a study. Power from the Redflow batteries is used by lighting, air conditioners, ovens, washing machines and home entertainment systems. James also uses the energy storage system to charge his 64 kWh Hyundai Kona electric car and ride-on electric lawnmower.

“Everything is electric, so the Redflow system lets us run everything we want, including charging the car and electric mowers … and electric tractors will come out at some time,” said James.

James said the Redflow-based energy storage system provided the house with all the energy it needed, although he did keep an eye on the system on cloudy days because he didn’t want a diesel-power backup generator. “One thing I really value is the ‘smart battery’ capabilities provided by the Redflow BMS (Battery Management System). I can monitor the batteries from an iPad in our kitchen to see their state of charge and, if I am away from here, I can use the Victron portal on my mobile phone.

“Redflow also has a great environmental story. As well as its batteries retaining their full storage capacity throughout their operating life, all battery components are easily recycled or reused, which is much better than with other battery chemistries.”

James said Redflow had been a great company to work with. “I’ve been very impressed with Redflow in multiple ways, their service has been fantastic,” he said. “They have helped to set up and configure the system. On one occasion, I didn’t even realise I had a problem, but they called me to say they had spotted an issue and were sorting it out. Redflow’s remote monitoring really pays dividends. Having an Internet connection and monitoring the batteries helps with their maintenance.”