Mini-Grids Are Ready To Change The World (Again) 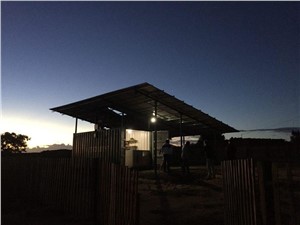 Mini-grids may finally be ready to change the world. But the small, self-sufficient electricity grids that connect communities who have not been reached by the main grid are not a new technology. In fact, the first grids were mini-grids. Edison and Tesla changed the world when they pioneered electrification with small privately-run grids, but eventually, the cheaper cost of large centralized grids quickly relegated mini-grids to a footnote in history.

Now electrification is coming full circle. Due to the declining cost of solar and storage, mini-grids have fallen dramatically in cost and they may change the world again. A recent World Bank report found that mini-grid capital costs in Africa have declined by over 50% in the last 8 years, as “the costs of key mini-grid components, such as solar panels, inverters, batteries, and smart meters, have decreased by 62%–85% as a result of innovations and economies of scale in utility-scale solar projects, the booming rooftop solar industry, and the growing electric vehicle market”. Recent analysis has shown that these decreased costs mean that mini-grids are now the lowest cost way of providing power to at least 100 million people living off-grid in Africa.

Governments and investors have begun to recognize this potential and see that mini-grids have a critical role in achieving universal electricity access in Africa by 2030. In June, a group of investors with more than US$2 billion under management released a public position paper stating “we believe mini-grids have a role to play in achieving universal electrification, and we have the types of capital needed for mini-grid financing”. This was closely followed by representatives from 10 African governments - Côte d’Ivoire, Ghana, Kenya, Liberia, Nigeria, Zambia, Uganda, Zimbabwe, Tanzania, and Cameroon – echoing that call and appealing to governments, international donors and the private sector “to commit the capital required to de-risk the mini-grids sector and to do so in collaboration with international and domestic financial institutions.”

The first barrier to infrastructure finance is that mini-grids, like most renewable energy projects, are small-scale infrastructure. And small-scale projects are hard to finance. The projects are not large enough to justify the fixed costs of a detailed evaluation of each project. This means projects must be aggregated into pools of sufficient size for investors to assess. The second challenge is that, unlike traditional infrastructure projects, mini-grids do not sell to large governments. They sell to poor rural consumers who are receiving electricity for the first time. This is a very hard risk to measure and price during this early stage of the sector.

A mini-grid deal in Tanzania might be the first sign the sector has found a way around these two barriers. In January CrossBoundary Energy Access (CBEA) a pioneering mini-grid infrastructure fund announced its first close with investments from the Rockefeller Foundation, CrossBoundary Group and Ceniarth. CBEA has now just entered into its first infrastructure deal to acquire over 50 mini-grids from one of the leading mini-grid developers, PowerGen Renewable Energy. As its mini-grids become operational, PowerGen sells them on an ongoing basis into a Special Purpose Vehicle set up by CBEA to pool the mini-grid assets. PowerGen will retain an ongoing share of revenues and an operating services contract to continue to operate and maintain the grids. The $5.5m deal is small compared to the billions the sector needs to scale. But it’s an exciting first demonstration that mini-grid assets can be matched to long-term infrastructure investors.

There are a few interesting aspects to the structure of this deal. First, to overcome the small scale of the assets, the SPV pools assets and spreads the fixed transaction costs across many assets. Second, CBEA has raised ‘blended finance’ from a mix of private impact investors and philanthropic foundations. This means that it is able to accept more risk and finance the ‘pioneering’ scale-up of the sector during these early days.

The potential of this model has been further validated by CBEA obtaining a long-term senior loan directly into the SPV from the Renewable Energy Performance Platform (REPP), a funding platform for renewable energy projects. CBEA hopes this investment will provide a blueprint for project financing mini-grids. The team is already planning to replicate the deal structure across Africa, aggregating operating projects to attract both blended finance and eventually increasing amounts of lower cost infrastructure capital from institutional investors.

“Ultimately this is a drop in the bucket compared to the billions needed to invest in mini-grids”, says Matt Tilleard, Managing Partner at Crossboundary Energy Access. “We believe this structure, and this investment, can be replicated at scale across the continent – both by us and others. To achieve universal energy access in Africa by 2030 we need one hundred CBEAs, each investing $100m - $1 billion.”

For PowerGen the structure fundamentally changes their business model. “CBEA’s structure provides the type of financing necessary for us to get to the next level of scale” says Powergen President Aaron Cheng. “We can rapidly scale and focus on operational excellence while transferring the financial burden of asset ownership. Operational excellence allows us to put greater focus on what we really care about - providing customers with better service and more value.”

Mini-grids have already changed the world once. But 600 million people in Africa still do not have access to electricity. This new financial innovation may be the beginning of a revolution in electrification that finishes what mini-grids started over 100 years ago.

Tell a friend:
Mini-Grids Are Ready To Change The World (Again)