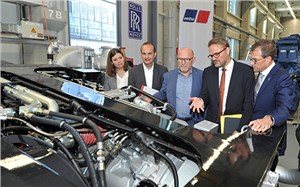 The Minister of Transport of the German state Baden-Württemberg, Winfried Hermann, has visited Rolls-Royce business unit Power Systems in Friedrichshafen and was introduced to the company’s future technologies for environmentally friendly mobility and power generation. Of special interest was the MTU Hybrid PowerPack for regional trains which could enter service in Baden-Württemberg as well: The Ministry of Transport of Baden-Württemberg has agreed with Rolls-Royce that Rolls-Royce will cooperate with train manufacturer Alstom on examining the economic feasibility of repowering existing Lint trains with hybrid drives. On the basis of this study it is to be determined in the summer if and to what extent trains could be retrofitted. The MTU hybrid technology allows for operations with zero local emissions on non-electrified tracks. Fuel consumption and CO2 emissions are cut by up to 25%, depending on routes and operational profiles. In station and inner city areas, traction noise in pure electric mode is reduced by up to 75 percent (20 dB(A)).

Transport Minister Winfried Hermann said: “We have to make use of all technical possibilities in order to reduce CO2 emissions, also in diesel-powered rail traffic. I am excited about the MTU Hybrid-PowerPack: it is a promising innovation which has been developed in our home state of Baden-Württemberg – and we would like to trial it here as well.”

Lars Kräft, Head of Industrial Business at Rolls-Royce Power Systems, said: “The MTU Hybrid PowerPack is currently establishing itself as drive system for the future on non-electrified routes. We would be delighted if trains with our hybrid drives could improve rail services in Baden-Württemberg, which is located virtually right on the doorsteps of our headquarters. Significant reductions of noise and emissions would be achieved, without any additional costs for changes in infrastructure.”

The MTU Hybrid PowerPack is an environmentally friendly drive system that combines the benefits of battery- and diesel-powered traction systems. It combines an MTU diesel engine, built to EU Stage V requirements, with an electric unit that can function both as a motor and as a generator, and with the MTU EnergyPack battery system that stores energy recovered during braking.

Within the past years, Rolls-Royce has brought this technology to full-production maturity, making ongoing refinements. Among the first customers are the state railway of the Republic of Ireland and the British leasing company Porterbrook. For the Hybrid PowerPack’s contribution to climate protection and resource conservation, the drive solution was recently awarded the Innovation Prize of German rail trade media publishing house Bahn-Media-Verlag.

As part of its strategy PS 2030, Rolls-Royce’s business unit Power Systems is focusing on technologies for the decarbonisation of drive and energy supply solutions. In addition to the Hybrid PowerPack, this concept includes microgrids, intelligent distributed electricity supply systems which Rolls-Royce is using to actively support the green energy revolution.