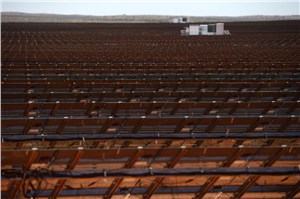 In mid-2017 Arizona’s First Solar was set up for a tricky 2018. It was overhauling its manufacturing facilities, juggling inventory, wary of the impact of Trump’s planned trade duties on all imports of solar panels and facing even stiffer competition from China.

As the months rolled on and 2018 arrived, things seemed to get better and better for the firm.

As opposed to the overwhelming majority of its competition, First Solar’s panels are based not on silicon but on thin-film technology. Historically its products have been about one third the size of standard silicon modules. That meant the forest of racking to suspend them on needed to be tailored and the labor involved in clamping and connecting them in position was greater.

The shift to a larger format module was revealed in April 2016 and the first working panel rolled off the production line in Malaysia in December 2017. Fast-forward one year and the first substantial project using the new Series 6 modules in under construction. The company was able to continue finding a market for the smaller Series 4 products and it is theoretically sold out of Series 6, even as it continues to add new production lines.

Many had predicted the President Trump’s Section 201 trade tariffs, which effectively include every country with any meaningful volume of solar manufacturing, would benefit First Solar. It has significant manufacturing capacity in the U.S. already. But it remained quiet throughout the majority of the lobbying efforts that, broadly speaking, pitted U.S. manufacturers against those companies that benefit most from procuring from China, Vietnam, Malaysia and elsewhere.

Developers in the U.S. were focused on highlighting what the tariffs could do to overall deployment predicting drastic cuts.

First Solar chose to stay quiet until the very end when it came out in favor of the tariffs. SolarWorld Americas has lobbied for trade tariffs on Chinese imports in the EU and the U.S. previously and took the lead pressing for the 201 tariffs once the process kicked off. It also took a lot of flak in the process, as their former German parent company did when it raised cases in Brussels on numerous occasions. First Solar had its say but remained largely untangled from became a divisive matter among the industry.

Projects have indeed been delayed in 2018 but shrewd developers and excellent engineering have ensured that shifting timelines and redesigns rather than swathes of cancellations are the order of the day.

In April the company announced the creation of 500 further jobs in Ohio with the planning of a 1.2GW manufacturing facility bulking up it Series 6 production. It was back in the mainstream headlines in October after securing a deal to build a solar plant for Facebook.

Back in First Solar’s existing factories, its centerpiece Series 6 plant in Ohio hit a technical issue that choked up the production lines. On a July conference call, CEO Mark Widmar explained that the fix was underway and would be copied in the Malaysian and Vietnamese plants. The end result was an expected 200MW drop in production for the year. A small price to pay for a valuable lesson. Even when things went wrong for First Solar in 2018 they got something out of it.

Tell a friend:
Why Nobody In Renewable Energy Had A Better 2018 Than First Solar