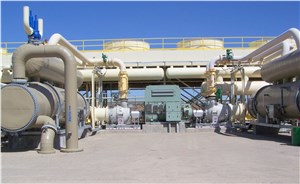 The SCPPA PPA will supersede Ormesa’s current 30-year Standard Offer Contract No. 4 with Southern California Edison that has a variable energy rate tied primarily to volatile natural gas prices and that will expire on November 29, 2017. Under the terms of the PPA, energy from the Ormesa complex will be sold to SCPPA at a rate of $77.25 per megawatt hour with no annual escalation. Contract capacity is 35 MW, with a maximum generation equivalent to a net capacity of about 43 MW. SCPPA will resell about 86% of this power complex’s output to the Los Angeles Department of Water and Power (LADWP) and the remaining 14% to the Imperial Irrigation District (IID).

Isaac Angel, CEO of Ormat Technologies said, “Geothermal power is a superior resource, offering customers firm and flexible power with no integration costs. We are delighted to be chosen again by SCPPA, LADWP and IID, who continue to recognize the value of cost-effective and reliable geothermal energy to meet their renewable energy goals. As for Ormat’s portfolio, this new PPA will eliminate our exposure to natural gas from the Ormesa complex and reduce our entire exposure to natural gas to approximately 50MW, which are less than 10% of our portfolio. As a result of the new PPA, we expect to see an improvement in Ormesa’s operating profit and EBITDA of approximately $8.5 million in 2018 compared to Ormesa’s expected operating profit and EBITDA in 2016.”

“Geothermal power will greatly assist LADWP in reaching our goal of 33% renewable energy by 2020 while transitioning away from coal power,” said Michael Webster, LADWP Executive Director of Power System Engineering and Technical Services. “The Ormesa geothermal complex’s energy will generate clean energy for homes in Los Angeles while we work to create a more sustainable energy future for all Angelenos.”
“As California moves aggressively towards a clean energy future, renewable resources from the Imperial Valley should continue to play a key role in meeting these goals,” said Norma Galindo, president, IID board of directors. “This facility is just one example of the prominent geothermal resources unique to this region that can be further developed and their energy exported to neighboring communities.”