Ormat Announces Closing of Acquisition of the Bouillante Geo 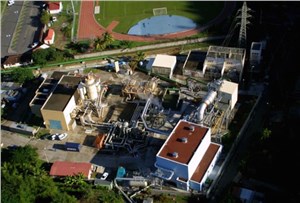 Ormat Technologies, Inc. announced today it has closed its previouslyannounced acquisition of Geothermie Bouillante SA (GB). GB owns and operates the 14.75 MW Bouillantegeothermal power plant located in Guadeloupe Island, a French territory in the Caribbean. The Bouillante plantscurrently generate approximately 10 MW with an expansion potential to up to 45 MW of capacity.

Ormat has signed an Amended and Restated Investment Agreement (the “Investment Agreement”) andShareholders Agreement with Sageos holding (Sageos), a fully owned subsidiary of Bureau de RecherchesGéologiques et Minières (BRGM). Under the agreements, Ormat together with Caisse des Dépôts et Consignations(CDC), a French state-owned financial organization, acquired approximately 80% interest in GB in the proportionof 75% to Ormat and 25% to CDC (i.e., approximately 60% acquired by Ormat and approximately 20% acquiredby CDC). Given the deal structure Ormat and CDC will gradually increase their combined interest in GB to 85%and Sageos will hold the remaining balance.

Pursuant to the above agreements, Ormat paid approximately €16.7 million (approximately $18.6 million, based oncurrent foreign currency exchange rates) to Sageos for approximately 60% interest in GB. In addition, Ormat iscommitted to further invest €7.5 million in the next two years, which will increase its interest to 63.75%. The cashwill be used mainly for the enhancement of the power plant.

Ormat plans modifications to the existing equipment as well as to further develop the asset, with a potential ofreaching a total of 45 MW in phased development, by 2021. Under the Investment Agreement, Ormat will paySageos an additional amount of up to €12 million subject to the achievement of agreed production thresholds andcapacity expansion within a defined time period.

Bouillante power plant sells its electricity under a new 15-year Power Purchase Agreement (PPA) that was enteredinto force in February 2016 with Électricité de France S.A. (EDF) the French electric utility. Ormat plans tooptimize the use of the resource at the existing facilities and recover its current production to its design capacity of14.75 MW by mid-2017. Upon completion of the enhancement, the plant is expected to generate approximately €20million of annual revenues.

“This acquisition marks another achievement in our strategic plan to expand our business to new geographies,”noted Isaac Angel, Chief Executive Officer. “CDC is an ideal partner for Ormat, as CDC is proficient with theFrench regulation and experienced in investments that serve the economic development of France. Together withBRGM and its commitment to the geothermal development, and with Ormat’s experience in the geothermalindustry, we can empower the local economy by generating direct and indirect jobs and provide Guadelouperesidents renewable, dependable, and cost-effective electricity.”

Tell a friend:
Ormat Announces Closing of Acquisition of the Bouillante Geothermal Power Plant in the Island of Guadeloupe