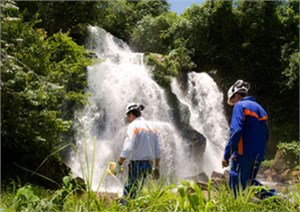 Enel Green Power has restarted the historic Cassibile hydropower plant built in 1908 in the province of Syracuse (Italy). The renewal work affected the whole plant, including its production units, outlet, diversion channel and penstocks

The historic Cassibile hydropower plant in Sicily is back in operation. The plant, in the province of Syracuse, went back online on January 14, following extensive restoration work carried out by Enel Green Power, which in so doing recovers 2.2 MW of installed capacity and gives a historic and strategic plant back to the region.

The Cassibile hydropower plant was built in 1908 and has been one of eastern Sicily’s first energy generation plants. A strategic infrastructure for this area, it also provided electricity during the Second World War, and for that reason it was bombed first by the Americans and then, after the Cassibile armistice was signed (on 3 September 1943), sanctioning the end of hostilities between the Kingdom of Italy and the Anglo-American forces, also by the Germans.

This jewel of industrial architecture remained inactive for 10 years waiting for safety measures to be applied due to landslides in the region caused by flooding in 2000. "For years it was not possible to access the plant because the only access road, a rocky 1.7 kilometre ridge, had collapsed”, explained the project manager for the plant’s restoration Ignazio Butera. ‘EGP, together with the regional government of Sicily and the city of Cassibile, then took action to make the road safe again and allow access to the facility’, which in the meantime had suffered copper and iron thefts.

The plant renewal project involved the whole building. A single production unit replaced the four original ones. Maintenance work was carried out on the outlet, where the water used for generation is collected, and along the 9 km-long diversion channel that approaches the water to the load tank. One of the two penstocks of this tank was demolished and rebuilt with spare parts transported by helicopter.

The plant has been given new life, enabling Enel Green Power to recover an installed capacity of 2.2 MW and returning an infrastructure strategic for the local economy and with high historic and industrial value to the region.