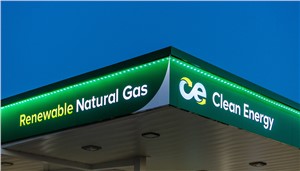 Clean Energy Fuels Corp., the largest provider of the cleanest fuel for the transportation market, announced new supply deals for renewable natural gas (RNG), as it forges ahead with development projects to meet the growing demand for the sustainable fuel made from organic waste.

“As fleet operators of large vehicles look at the entire alternative fuel landscape, RNG continues to rise to the top as they consider carbon reduction, ease in fueling, reliability and cost,” Chad Lindholm, Clean Energy’s senior vice president for sales. “We continue to add new customers across all transportation sectors as they realize the benefits of RNG fueling.”

California Transportation Dynamics in Commerce, CA, a leading trucking company for 25 years, has signed a fueling agreement with Clean Energy for an approximate 1.2 million gallons of RNG for the length of the contract. CTD is migrating 40 diesel trucks to units powered by RNG.

Analysis By Production, By Consumption, By Feedstock (Tallow, UCO, Corn Oil, Fish Oil, and Other), By Region Size and Trends with Impact of COVID-19

“In today’s legislative climate it gets harder and harder for transportation companies to stay in business,” said Ed Rosas, CEO, California Transportation Dynamics. “We are thankful for Clean Energy’s assistance and advocacy to help us upgrade our fleet into compliant clean trucks.”

National Ready Mixed Concrete in Encino, CA has signed a fueling agreement for an estimated 130,000 gallons of RNG to power 13 trucks.

The City of Claremont, CA has signed a multi-year fueling agreement to power 20 refuse trucks with an anticipated 400,000 gallons of RNG.

NGL Logistics in Gardena, CA has added six new natural gas trucks to its fleet that will replace diesel trucks, and will fuel with an expected 260,000 gallons of RNG.

“This is our first time deploying RNG trucks and they are running extremely well for our operations,” said J.J. Lee, president of NGL Logistics. “NGL Logistics is proud that we can help reduce carbon emissions and improve air quality. We understand that this is a necessary environmental change and with our RNG-powered trucks we are closer to achieving that goal for our industry.”

In its first foray into converting its fleet to natural gas trucks, Gen Logistics, which services the Ports of Los Angeles and Long Beach, has signed a fueling contract with Clean Energy for an anticipated 30,000 gallons of RNG to power new trucks.

Growth in Vehicles and Infrastructure
Clean Energy added a large new transit customer, Trinity Metro, which serves Fort Worth, Texas one of the fastest growing large metropolitan areas in the U.S. The agreement is for operations and maintenance for 184 buses that will fuel with an expected 10.5 million gallons for the length of the contract.

The City of Mesa, Arizona has signed an operations and maintenance agreement for its refuse station which fuels 72 solid waste trucks with an approximate one million gallons of CNG.

The City of Lexington, KY has added seven new CNG refuse trucks to its fleet, expanding its existing fueling agreement by an anticipated 56,000 gallons. The City also granted Clean Energy a renewal of its 5-year operations and maintenance contract for the station.

Clean Energy has been awarded a contract to construct a fueling station for Elizabethtown Gas, a subsidiary of South Jersey Industries, to fuel 40 new natural gas refuse trucks for Waste Management in Lafayette, NJ.  The contract includes a multi-year repair and maintenance contract with Waste Management and an estimated 350,000 annual gallons of CNG.

Bison Trucks Group, a shipping company in Orlando, FL, has signed a fueling agreement for an approximate 224,000 gallons of natural gas to fuel 14 trucks.

Howard Logistics and Solutions in Dallas has signed a fueling agreement for an approximate 105,000 gallons of CNG to power its trucks.

GFL Environmental, a refuse company in Edmonton, Alberta, Canada has signed an agreement to fuel 33 trucks with an expected 1.5 million gallons of CNG. In addition to the fueling agreement, the contract includes station improvements and operations and maintenance services.

RNG Supply Advances
Clean Energy continues to make significant investments in the production of additional RNG sources. The joint ventures with two of the most sustainability-committed global energy companies, TotalEnergies and bp, allows for the necessary capital to partner with dairy owners around the country.

Construction of the RNG digester at Del Rio Dairy in Friona, TX is near completion, with commissioning of RNG flow expected to begin in Q4 2022. When operational, the manure from 7,500 milking cows will produce more than a million gallons of RNG a year.

Significant engineering and development progress has been made at South Fork Dairy in Hart County, TX. When complete, the project will produce an anticipated 2.9 million gallons of RNG.

Construction is nearing completion at Marshall Ridge, Drumgoon and Victory dairy farms, located in South Dakota and Iowa. With more than 30,000 cows, these dairies have the estimated potential to convert the methane produced from waste into more than seven million gallons of RNG annually.

At Millenkamp Dairy in Idaho, one of the largest in the country, construction is continuing with the completion of the digester tank slated for early-2023.

“We continue to make great progress on our RNG supply goals that we stated at the beginning of the year,” said Clay Corbus, senior vice president and head of renewable fuels. “Dairy owners are looking for a partner that can give them a known market as they develop their RNG supply, and no other company can do that like Clean Energy.”