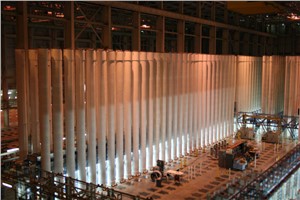 X-energy and Centrus Energy Corp. (NYSE American: LEU) today announced that the preliminary design of X-energy's TRISO-X Fuel Fabrication Facility has been completed and that the companies have signed a contract for Centrus to continue its work as the project enters its next phase.

"Centrus is pleased to be part of X-energy's team in designing and developing this next generation fuel fabrication facility," said Larry Cutlip, President of American Centrifuge Operating, a wholly-owned subsidiary of Centrus.  "We greatly value this partnership and look forward to continuing this important work to bring TRISO-X fuel to market."

X-energy contracted with Centrus in 2018 to support the facility's preliminary design work, which is now complete.  Under a new contract supported by the DOE Office of Nuclear Energy Demonstration Tier of the Advanced Reactor Demonstration Program, the largest tier of award in the program, X-energy will finalize the detailed design of a commercial-scale TRISO-X fabrication facility.

The TRISO-X facility will wrap HALEU-bearing kernels of oxide and carbide in alternating layers of pyrolytic carbon and silicon carbide, creating a self-contained, meltdown-proof fuel. The facility is designed to support the deployment of X-energy's flagship XE-100 power plant in Washington State by 2027 under an award from the U.S. Department of Energy's Advanced Reactor Demonstration Program (ARDP.)  The facility will also be capable of supporting other Xe-100 sites and a variety of customers needing other fuel forms of TRISO.