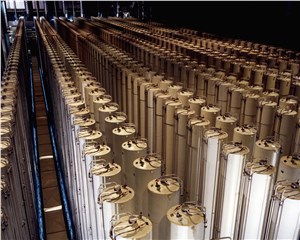 Centrus Energy Corp. announced today it has entered into a new follow-on contract with UT-Battelle, LLC, as operator of the U.S. Department of Energy’s Oak Ridge National Laboratory, for maintaining and advancing U.S. gas centrifuge uranium enrichment technology. The contract is valued at approximately $25 million and runs through September 30, 2017. Under the terms of the contract, Centrus will perform engineering and testing work on the American Centrifuge uranium enrichment technology to support future national security and energy security needs.

“With this contract, our scientists, engineers and operations staff can continue their vital work ensuring that an advanced U.S. uranium enrichment technology is ready for deployment when the country needs it,” said Larry B. Cutlip, vice president, Field Operations. “While those decisions will be made by the President and Congress, Centrus remains committed to being a reliable partner for the U.S. government in advancing America’s critical national interests.”

Under this new contract, Centrus scientists, engineers, and operators will utilize the Company’s unique facilities in Oak Ridge, Tenn., to develop and test technology improvements to reduce costs, improve manufacturability, and enhance long-term reliability of U.S. uranium enrichment technology. The work ensures that critical U.S. expertise in centrifuge technology and operations is maintained and advanced to meet the future needs of the nation.

The Company noted that, while the vast majority of its business is focused on supplying nuclear fuel to utilities through contracts with a global network of uranium enrichment producers, Centrus remains committed to its role in supporting U.S. national interests.

The United States, which once led the world in uranium enrichment, shut down the last of its outdated and increasingly uneconomical Cold War-era enrichment plants in 2013 – leaving the nation without a domestic, industrial-scale uranium enrichment capability for national security purposes for the first time since the Manhattan Project. For commercial electricity production, the United States now imports the great majority of its enriched uranium fuel from Russia, Europe, and China.

While current market conditions do not support building a full-scale uranium enrichment plant for commercial purposes, over the long-term the United States will need to deploy a domestic enrichment technology at industrial scale to strengthen energy security, advance U.S. nonproliferation goals, provide fuel for the long-term needs of the nuclear Navy, and ensure a supply of tritium, which is needed to maintain the effectiveness of America’s nuclear deterrent. In October 2015, the U.S. Department of Energy issued a report to Congress which explored a range of possible technologies and found that the American Centrifuge is the “most technically advanced and lowest risk option” for restoring America’s domestic uranium enrichment capability to meet long-term national security needs.