U.S. Energy Announces Strategic Acquisition of a $50 M Asset in the Delaware Basin 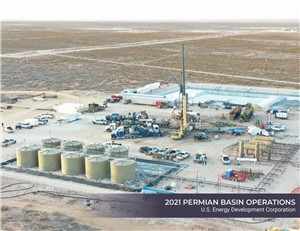 U.S. Energy Development Corporation (U.S. Energy), an exploration & production (E&P) firm which provides direct investments in energy, announced its most recent strategic acquisition of a $50 million asset in Loving County, Texas, in the core of the Delaware Basin.

The project has wells targeting three of the basin's most prolific benches – 3rd Bone Spring, Wolfcamp A and Wolfcamp XY. The new deal brings U.S. Energy's total investment in the Permian Basin to $135 million over the past year.

This acquisition announcement marks U.S. Energy's fifth major deal in the calendar year. The firm is planning to invest an additional $400 million among the Permian, Powder River, Eagle Ford and DJ Basins over the next two years.

The Permian Basin is one of the oldest and most widely recognized oil and gas producing regions in North America. It covers approximately 86,000 square miles across New Mexico and Texas. The Permian is divided into three main sub-basins: Midland Basin, Central Basin and Delaware Basin.

Tell a friend:
U.S. Energy Announces Strategic Acquisition of a $50 M Asset in the Delaware Basin