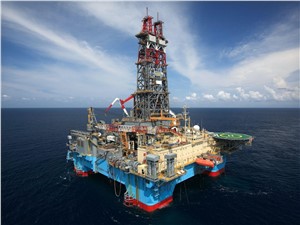 Frontera Energy Corporation (TSX: FEC) ("Frontera" or the "Company") today announced the spudding of the Kawa-1 exploration well, offshore Guyana. CGX Energy Inc. ("CGX") (TSXV: OYL), Frontera majority-owned subsidiary, and its joint venture partner (collectively, the "Joint Venture") in the Demerara and Corentyne blocks, also separately announced an update on spud of the Kawa-1 well. Additionally, the Joint Venture has exercised its option to drill a second well with Maersk Drilling Holdings Singapore Pte ("Maersk") through the use of Maersk Discoverer.

Gabriel de Alba, Chairman of Frontera's Board of Directors and Co-Chair of CGX's Board of Directors commented:
"Today is an important day for Frontera and CGX as we continue to make substantial progress in realizing the value of our investments in Guyana. The Joint Venture has spud the Kawa-1 well, which we believe is one of the most exciting exploration wells in the world. The Joint Venture has also exercised its option to drill a second well offshore Guyana under similar terms and conditions. I am pleased with this major operational milestone for Frontera and CGX and appreciate the ongoing support of the Guyanese government, our employees, and our other various partners as we work together to maximize benefits for all of our stakeholders."

With multiple opportunities based on internal geological studies, the Kawa-1 well targets light oil in combination structural-stratigraphic traps in large Santonian and Campanian slope fan complexes. The primary target is a Santonian sand with updip and lateral pinchout of the reservoir, as well as counter-regional dip and structural closure. The Kawa-1 well is also expected to penetrate secondary objectives in a shallower Campanian sand and a deeper Santonian sand with the expectation of targeting additional hydrocarbon potential. The stacked targets in Kawa-1 are considered analogous to the discoveries immediately adjacent to the Corentyne Block, in Block 58 in Suriname.

Additionally, the Kawa-1 well is expected to de-risk multiple other prospects on the block which also have stacked reservoirs and similar structural geometries. Proximity of the Corentyne block to the Cretaceous Berbice Canyon sediment source is interpreted to have concentrated sandstone reservoirs in the North Corentyne area. Channelized, stacked internal fan geometries evident on 3D seismic are indicative of thick, stacked, coarser-grained sand reservoirs.

Drilling Team
The Joint Venture has assembled a highly-qualified and experienced team for the drilling campaign, with extensive deep water drilling expertise from operations around the globe, including the Guyana Basin, which includes: