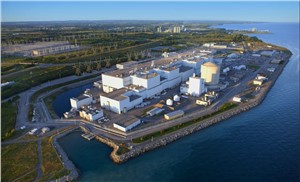 Ontario Power Generation (OPG) has selected GE Steam Power (GE) for a $120 million turnkey installation  project, featuring both hardware and software technologies, as part of its ongoing refurbishment of  the Darlington Nuclear Generating Station in Canada.

This project will play an important role in enabling Darlington to continue delivering reliable, carbon-free nuclear power to Ontario for more than the next 30 years. Today, Darlington is responsible for generating over 20% of Ontario’s electricity needs, providing enough power for two million homes.

The agreement between OPG and GE Steam Power includes the turnkey installation and commissioning of steam turbine and excitation control system upgrades, as well as generator and auxiliaries refurbishment for 3 units.

“GE Steam Power has enjoyed a strong, long-standing partnership with OPG in showcasing nuclear energy’s role as a critical pillar of a carbon-free future,” said Lance Hall, General Manager, GE Steam Power Americas. “We’re proud to support OPG as a single-service provider for the entire steam turbine and generator refurbishment scope at Darlington to help them continue to deliver reliable, carbon-free power generation for Canada for the next 30 years or more.”

GE Steam Power has been supporting Darlington with its long-term refurbishment strategy that began in 2013. Previous projects include the supply of a 400-ton generator stator in 2019, ongoing support with steam turbine/generator maintenance outages, and resident engineer service since the plant began operation.

With nearly 50% of the world’s nuclear fleet equipped with a GE steam turbine, Darlington will benefit from GE Steam Power’s global expertise to maintain high-performing and safe operation.