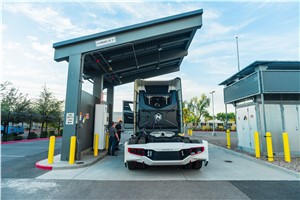 Ruiz was unanimously approved as Convener to work with an international core group of experts to implement the fueling protocol standardization initiative following more than two years of building consensus within the global hydrogen community to prioritize this activity.

"The receipt of such international support is a significant step toward developing international standards and the fueling requirements needed to accelerate the adoption of heavy-duty fuel-cell electric trucks and, to advance the global deployment of hydrogen and fuel-cell technologies," said Ruiz.

The TC 197 committee focuses on the standardization of systems and devices for the production, storage, transport, measurement and use of hydrogen. The committee consists of hydrogen and fuel-cell technology experts that represent member countries, hydrogen industry and stakeholders throughout the Americas, Asia, Australia and Europe. The international standardization of technically sound solutions may replace incompatible national requirements, allowing for consistency and global competitiveness of high-flow hydrogen fueling.

The fueling standard consists of three tasks:  designing a process for developing fueling protocols; defining communications required between the vehicle and the station; and developing a high-flow fueling protocol for heavy-duty vehicles. Developing these needed fueling procedures and requirements under ISO/TC 197 and its membership ensures that these standards are technically sound, consensus-based, and adopted on a global scale.

Before joining Nikola in October 2018, Ruiz previously served as technology development manager and team lead for the U.S. Department of Energy.