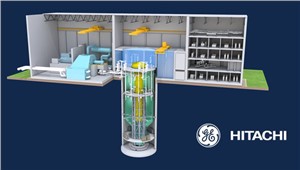 GE Hitachi Nuclear Energy (GEH) today announced that the U.S. Nuclear Regulatory Commission (NRC) has issued a Final Safety Evaluation Report for the first of several licensing topical reports (LTRs) that have been submitted for the BWRX-300 small modular reactor (SMR). The LTR, which was submitted to the NRC in December 2019, forms the basis for the dramatic simplification of the BWRX-300.

“Obtaining NRC approval of the specific innovations that simplify the BWRX-300 design is a major milestone in our efforts to license this game-changing technology,” said Jay Wileman, President & CEO, GEH. “The BWRX-300 will leverage much of the existing licensing basis of the NRC-certified ESBWR and this LTR will accelerate our commercialization efforts as we remain laser focused on making the first SMR operational later this decade.”

Two additional LTRs were submitted in early 2020 and GEH anticipates the review of these LTRs will be completed in the coming months. A fourth LTR was submitted in September 2020. GEH expects such LTRs to serve as a foundation for the development of a Preliminary Safety Analysis Report that could potentially be submitted to the NRC by a utility customer.