Exelon May Split Its Utilities From Nuclear, Generation Business 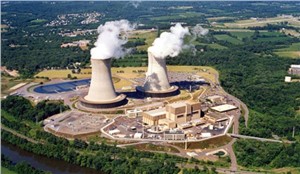 Exelon Corp. confirmed Tuesday that it is exploring a plan to separate its multistate utilities businesses from its generation business, which is preparing to close two of its 21 nuclear power plants due to money-losing market conditions.

CEO Chris Crane confirmed the “review of our corporate structure,” first reported to be underway by Bloomberg last month, during the Chicago-based company’s third-quarter earnings conference call. The move comes as Exelon is struggling with profitability at several of its nuclear plants, which face falling energy prices and challenging conditions in the capacity market run by mid-Atlantic grid operator PJM.

“No decision has been made, but we continue to do the work to determine the best outcome for our stakeholders, and we'll provide you an update on our progress on the next earnings call,” Crane said. “What we want to make sure is that we have two healthy companies, a utility business — if we and the board determine this is the right thing to do — two healthy businesses that can stand on their own.”

But Exelon has not secured subsidies for four other Illinois nuclear power plants, including the Byron and Dresden facilities. In August it announced it will close those plants in 2021 and may also seek early retirement of its Braidwood and LaSalle power plants unless it can obtain state support to bolster their economics.

Those plants and the two set to close next year provide 70 percent of Illinois’ carbon-free power. Losing them would make it harder for the state to chart a path to Governor J.B. Pritzker and state lawmakers’ goal to eliminate its electricity sector carbon emissions by 2050.

“Despite being among the most efficient, reliable units in the U.S. nuclear fleet, they face revenue shortfalls, declining energy prices, lack of capacity revenue and market rules that allow fossil plants to underbid clean energy resources in the PJM market auction,” Crane said.

State support for zero-carbon nuclear scrambled by bribery scandal
Exelon had gathered support last year for a bill that would have created a new state capacity market structure to bolster its nuclear fleet’s revenues. This “Fixed Resource Requirement,” or FRR, structure would have pulled some plants out of PJM’s capacity market, where they are likely to struggle to compete under federally mandated rules that will force state-subsidized resources to adhere to minimum bids that could undermine their competitiveness against fossil-fueled power plants.

But the FRR plan contained in last year’s Clean Energy Jobs Act lost lawmaker support in the wake of Exelon utility ComEd's connection to a federal bribery investigation alleging the utility steered jobs, contracts and payments to House Speaker Michael Madigan in exchange for favorable treatment in the state capitol. Exelon agreed to pay a $200 million fine and submit to a deferred prosecution agreement this summer.

Gov. Pritzker has so far rebuffed Exelon’s entreaties for state aid for its nuclear power plants, calling its August decision to close the Byron and Dresden plants a “threat.” Pritzker’s office has proposed a clean energy plan laying out his preferred path for achieving the state’s decarbonization goals, after the Clean Energy Jobs Act and a rival clean energy bill, dubbed Path to 100, were unable to advance during this year’s legislative session, which was dominated by issues related to the COVID-19 pandemic.

Crane told analysts that gaining an FRR for Exelon’s Illinois nuclear fleet was not a “gating factor” for whether or not it would move forward with its reorganization. “If the plants are not profitable, they don't cover their cash needs or the earning requirements, we shut them down, with or without FRR,” he said. “Some people have called it a threat. It's not a threat. It is just a reality.”

Crane also objected to characterizations of Exelon’s request for state aid as a bailout of its plants. “The nuclear fleet is [the] only zero-emitting fleet that does not get compensation for its value, so this is not a bailout. It's leveling the playing field.” Exelon shut down its Three Mile Island nuclear plant in Pennsylvania after failing to receive state support.

Exelon is not the first U.S. utility in recent times to consider splitting its regulated utility businesses, which earn state regulator guaranteed rates of return from ratepayers, from its nonregulated energy businesses, which are subject to the vagaries of the market. In July, Dominion Energy agreed to sell its competitive natural gas businesses to Warren Buffett’s Berkshire Hathaway for $9.7 billion to refocus on its regulated electric and natural gas utilities serving about 7 million customers in Virginia, the Carolinas, Ohio and Utah.

Dominion’s move, announced on the same day it and Duke Energy canceled their Atlantic Coast Pipeline natural gas project, was also driven by Virginia’s decision to set a target of 100 percent zero-carbon by midcentury for its investor-owned utilities. Michigan’s DTE Energy, another utility in a state pursuing decarbonization by 2050, announced last month that it’s seeking to divest from its DTE Midstream competitive natural gas business.

Tell a friend:
Exelon May Split Its Utilities From Nuclear, Generation Business