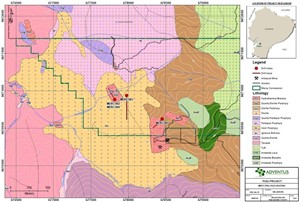 Adventus Mining Corporation and Salazar Resources Limited (together the "Partners") are pleased to provide an update  regarding diamond drilling activities that have been ongoing at the Pijili project since late June 2020 as part of the planned 5,000 metre 2020 calendar year program, as outlined in the June 8, 2020 news release.

The Partners are the first explorers to drill this new porphyry copper-gold-molybdenum system identified at the Pijili project's Mercy concession, in southwestern Ecuador's Azuay province. The project is located approximately 5 km south of the Chaucha copper-molybdenum deposit controlled by Southern Copper Corporation. A second diamond drill rig was added to the project in early August with both drill rigs owned and operated by Andesdrill S.A. of Ecuador, a wholly owned subsidiary of Salazar. Drilling to date has completed a total of approximately 1,744 metres with one drill hole complete and two in progress. Collar locations for the drill holes are presented in Table 1 and a location plan map is shown in Figure 1.

The first drill hole, MERC-001, was recently completed and it was collared to examine the mapped hydrothermal breccia units located approximately 300 metres to the north of artisanal mine workings. MERC-001 intersected numerous breccia units at the top of the drill hole (1.40 to 19.85 metres; 34.40 to 40.2 metres; 65.75 to 67.25 metres; and 112.20 to 131.25 metres) within a variably altered quartz diorite intrusion over its 915-metre length. The breccia units at the top of the drill hole were predominantly biotite and chlorite altered and contained visible sulphide mineralization (chalcopyrite, pyrite, ± bornite, and ± molybdenite). The determination of orientation and potential structural control of the hydrothermal breccia units will require additional drilling at this early stage.

The second drill hole, MERC-002, is currently in progress. It is collared 685 metres to the northwest of MERC-001 and the drill hole was designed to evaluate an area of hydrothermal breccia mapped on surface associated with the Zambohuaycu showing. Channel sampling results from this showing returned the following highlighted results (see June 8, 2020 news release):

Below the hydrothermal breccia intervals in MERC-002, weaker intensity sulphide mineralization continues to be noted in both feldspar phyric and hornblende phyric diorite intrusive phases to the current depth of approximately 559 metres. Technical crews continue to sample MERC-002 as drilling continues. A follow-up drill hole is being planned to further evaluate the orientation and potential structural control of the mineralized hydrothermal breccia.

The third drill hole, MERC-003, is currently in progress and it is collared 167 metres to the east-northeast of MERC-002. This drill hole was designed to evaluate the porphyry-style veining mapped on surface and to determine if hydrothermal breccia units mapped at the Zambohuaycu showing extend to the northeast. Drilling has verified the presence of porphyry-style veining with variable sulphide mineralization (chalcopyrite ± pyrite) to its current depth of approximately 270 metres, hosted in predominantly hornblende phyric intrusion. No hydrothermal breccia has been intersected in MERC-003 to date.

A manual trenching program at Pijili has recommenced to support the drilling program and to evaluate possible extensions to channel and chip sampling presented in the June 8, 2020 news release.

Assay results from drill core samples will be released after they are received from the laboratory and passed internal quality control and quality assurance (QAQC) protocols. The first batch of drill core results are expected to be available in October. Similarly, the manual trenching geochemistry results for both chip and channel samples will be available later in the year.

Tell a friend:
Adventus and Salazar Add Second Drill Rig To Exploration Program at the Pijili Project and Provide a Drilling Progress Update