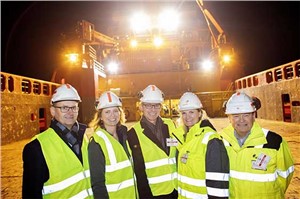 Since 2003, Wärtsilä and Eidesvik Offshore have collaborated on the development and verification of new environmental technology. Now the two companies are joined by Equinor, Prototech and EU initiative, ShipFC, in a five year demo project where the «Viking Energy» will become the world’s first zero emissions supply vessel – with fuel cells powered by ammonia.

Many in the shipping industry consider ammonia to be one of the future fuel options for achieving zero emissions. Together with ShipFC, and partners Eidesvik Offshore, Equinor and Prototech, Wärtsilä will now determine if this is the case. In a five year demo project, the involved parties will test a new energy system based on ammonia powered fuel cells. The solution will be tested on Eidesvik’s supply vessel, the «Viking Energy», and the technology will make the 17 year old workhorse the world’s first zero emissions supply vessel when green ammonia is used as fuel.

“Fuel cell modules with a combined effect of 2 MW will be installed on board the «Viking Energy» in 2023. The vessel will operate at sea for one year with the new energy system, and the goal is to be able to document zero emissions from the vessel during the period it is fuelled by ammonia. For the shipping industry, such results will mean that we are one step closer to the IMO’s goal of a minimum 50 per cent reduction in greenhouse gas emissions from international shipping traffic by 2050,” says Ingve Sørfonn, head of technology and development in Marine Electrical Systems at Wärtsilä.

Wärtsilä’s contribution to the pioneering work on the «Viking Energy» is the development and delivery of all electronic equipment, all control equipment, as well as the systems required for the storage and distribution of ammonia on board. Wärtsilä will also be responsible for all the integration and design work required to fit the new energy system. This means that several business areas within Wärtsilä Norway will be involved.

Providing important answers to the crossroads of the shipping industry

“By qualifying new technology that will provide future vessels with the flexibility to choose between different fuels, the ammonia project will give important answers to the question of which technologies and fuels the shipping industry should go for in the future. Today, few believe that any single fuel type will take over the hegemony after fossil fuel, so the possibility to use several different fuels will be important in order to reach the emission reduction targets at sea,” says Sørfonn.

“We have had a long and fruitful cooperation with Eidesvik, and we look forward to creating new results together with them and Equinor in the «Viking Energy»ammonia project. At the same time, we look forward to more collaboration with the fuel cell integrator Prototech. Their technology is vital for the success of this project,” Sørfonn continues – and adds that the five year project is financed through the EU project ShipFC, the partners, Innovation Norway and Enova, and is coordinated by NCE Maritime CleanTech.

Based on 15 years of research by Eidesvik and Wärtsilä

Eidesvik Offshore and Wärtsilä Norway have, since 2003, had a particularly close industrial collaboration aimed at developing greener and more efficient vessels. Back then, Wärtsilä’s dual fuel engines made the «Viking Energy» the world’s first supply vessel fuelled by LNG. In the same year, the two companies established the research programme «FellowSHIP», together with DNVGL. The 15 year long programme was key to the development of hybrid energy solutions and the qualification of fuel cell technology on vessels.

From 2009 to 2015, the Eidesvik vessel «Viking Lady» functioned as a floating laboratory for the FellowSHIP programme, with more than 20,000 hours of stable operation with LNG fuel cells. This earned the supply vessel the title of «the world’s most important ship towards maritime low and zero emission technology». During the climate summit in Copenhagen in December 2009, the ship was showcased as a part of the official programme, and in 2012 the «Viking Lady» was on the list of the 100 most important innovations for a sustainable future.

“The FellowSHIP programme on board the «Viking Lady» is one of the pillars for the ammonia project. The technological solutions provided by Wärtsilä throughout the years, from as far back as the LNG project in 2003, via fuel cell and hybrid solutions, and now to the ammonia project, have played a vital role in getting us where we are today,” says Vermund Hjelland, head of technology and development in Eidesvik Offshore.