Pad-Mounted Switchgear Market worth $7.2 billion by 2024 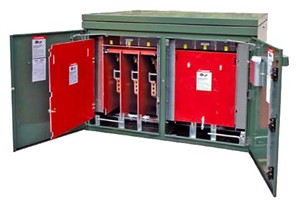 The report "Pad-Mounted Switchgear Market by Type (Air, Gas, Solid Dielectric), Voltage, Application (Industrial, Commercial, & Residential), Standard (IEC, IEEE), and Region - Global Forecast to 2024", is projected to reach USD 7.2 billion by 2024 from an estimated market size of USD 5.5 billion in 2019, at a CAGR of 5.4% during the forecast period. The global market is set to witness significant growth owing to increasing investments in distribution infrastructure to meet the growing electricity demand along with investments in underground distribution due to functional and aesthetic advantages.

The solid dielectric segment is expected to be the fastest growing segment in the pad-mounted switchgear market, by type, during the forecast period

The solid dielectric segment is expected to grow at the highest rate during the forecast period. This growth can be attributed to the increased demand for SF6 alternatives in response to the stringent restrictions imposed on the use of SF6. In the US, which holds the largest market share in the North American market, many utilities such as PG&E have proper plans in place to carry out the replacement of SF6 equipment. In solid dielectric switchgears, epoxy is used as the insulating medium, which is environmentally safe and inert.

Europe is expected to dominate the global pad-mounted switchgear market during the forecast period.

To enable an in-depth understanding of the competitive landscape, the report includes the profiles of some of the top players in the pad-mounted switchgear market. These include Eaton (Ireland), Hubbell (US), Federal Pacific (US), S&C Electric (US), G&W Electric (US), ABB (Switzerland), AZZ (US). The leading players are trying to establish themselves in the markets of developed countries and are adopting various strategies to increase their respective market shares.

Tell a friend:
Pad-Mounted Switchgear Market worth $7.2 billion by 2024