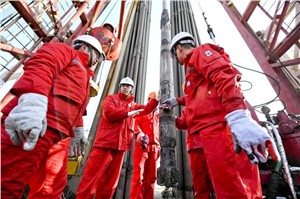 China Petroleum & Chemical Corporation has announced a significant breakthrough as its self-developed Sinomacs ATS I type rotary steerable drilling system drilled to a depth of 857 meters after working 141 hours non-stop from December 13 to 19 in an oil well in SLOF (Shengli Oil Field), Shandong Province.

The build-up rate of Sinomacs ATS I reached a maximum of 6.6 degrees per 30 meters, the overall performance was commented by notable drilling rig technology expert Liu Rushan as "landmark results that solved the problems associated with traditional rotary drilling systems."

The steerable rotary drilling system is the farsighted and fleet-footed assistant of the drill that enables faster drilling in underground gas and oil reservoirs at a lower cost. It's the preferred technology of petroleum companies to complete horizontal well drilling due to its ability to hit targets every time according to the designed track accurately.

More than 40 percent of the directional wells in the world are implementing this system, but it's an immensely difficult technology to develop due to a large number of fields involved in the R&D process.

The Sinopec R&D team started from scratch with a design principle and calculation born from countless experiments, tests and stimulations on the mechanical components, electronics and software. The first static push-type steerable rotary drilling system was created in December 2012.

Since 1999, Sinopec has researched and developed the steerable rotary drilling system independently. After 20 years, it has finally become a complete technology and equipment system with proprietary intellectual property rights.

"Sinopec will continue to develop and promoting the application of the steerable rotary drilling system to mass-produce the technology in the future so that Sinopec's gas and oil services will move towards the path of high-end and professional development."