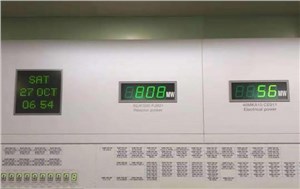 Power start-up of Tianwan NPP (TNPP) power unit No.4 being constructed in China under the Russian NPP design with VVER-1000 reactors took place on October 27 2018 at 01:53 msk. The fourth power unit produced the first kilowatts of output to the national grid system.

In compliance with the permit obtained from the Chinese regulatory authority the reactor plant of power unit No.4 was brought to 25%, followed by the turbine push start and the electrical tests of the excitation and power output systems. This work resulted in the power unit connection to the power system. All the power unit systems were operating in the design mode.

According to Alexey Likhachev, Director General of ROSATOM, 'Tianwan NPP currently is the largest Russian-Chinese power project that is being developed successfully due to the synergism of specialists from two countries. And start-up of the fourth power unit is a further proof thereof. At the Tianwan NPP site we became a united team with our Chinese colleges, which facilitates the result achievement. Surely our further cooperation both in the construction of the next stages of Tianwan NPP and on a new Xudapu site shall also be efficient and fruitful'.

According to Valery Limarenko, Head of ROSATOM's Engineering Division, power start-up of Tianwan NPP fourth power unit is another victory of the team of Russian and Chinese specialists. 'Our partnership lasting for several decades provides additional confidence in further successful continuation of our work, we have even greater challenges ahead on construction of four power units of the VVER-1200 project, the VVER-1000 project evolutionary design', he said.