US DoE Extends Portsmouth Decontamination and Decommissioning Contract through March 2021 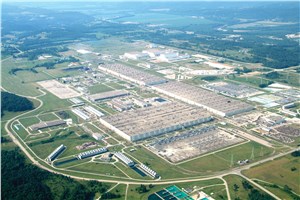 Fluor Corporation (NYSE: FLR) announced today that the U.S. Department of Energy (DOE) has exercised its option to extend the current decontamination and decommissioning work on the former Portsmouth Gaseous Diffusion Plant (GDP) in Piketon, Ohio for an additional 30 months. The contract will be executed by Fluor-BWXT Portsmouth, LLC, a Fluor-led partnership, together with BWX Technologies, Inc. and Jacobs. Fluor will book its share of the approximately $850 million contract value in the third quarter of 2018.

Fluor-BWXT started work on the initial five-year contract on March 28, 2011. The original contract was extended for 30 months in April 2016. The contract extension includes deactivation and preparation for demolition and disposal of all GDP facilities, process equipment, related process buildings, and other ancillary facilities, and to continue environmental remediation, uranium stewardship, and community outreach programs.

“We are pleased with the Department’s confidence in our performance and ability to deliver on the important Decontamination and Decommissioning work that is well underway at Portsmouth,” said Tom D’Agostino, president of Fluor’s Government Group. “Tremendous progress has been made in deactivating two of the three massive process buildings on the site in preparation for demolition and on-site disposal. The 30-month extension allows our team to maintain the momentum of working toward achieving our end goal in a consistent and collaborative manner with DOE and the community.”

The DOE Portsmouth GDP is located near Piketon, in southeastern Ohio. The Portsmouth GDP is a 3,778-acre federal reservation that was built in the early 1950s as part of the nation’s nuclear weapons complex and enriched uranium from 1954 until 2001.

Tell a friend:
US DoE Extends Portsmouth Decontamination and Decommissioning Contract through March 2021