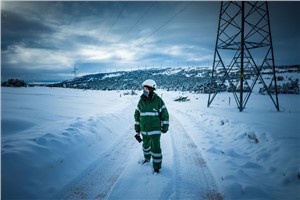 Iberdrola has signed a partnership with Bilbao, Biscay-based Woza Labs to protect its power lines from climate change. The startup will use its expertise to develop digital solutions, such as geographic information systems and satellite image analysis, which will enable Iberdrola's network business to predict, plan and quantify climate risks that may cause damage to network assets.

Woza Labs is the winner of the challenge launched in October by Iberdrola through its PERSEO startup programme. The Basque company will design a programme to determine how climate change and its derivatives - strong winds, torrential rains, Filomenas - may affect Iberdrola's grids. This will allow the company chaired by Ignacio Galán to prioritise grid investments or reforms to mitigate these risks. The aim is to scale this type of solution to the geographies where the group operates.

Distribution lines are one of the pillars of the electricity system worldwide, and even more so with the integration of renewable production, the drive for energy efficiency and the improvement of the quality of supply. Iberdrola, with 1.1 million power lines, aims to reduce faults in distribution networks in forest environments, most of which are due to falling trees and branches caused by weather phenomena caused by climate change.

The distribution grid, due to its extension and the new environmental threats, requires investments to improve its resilience, so that it is prepared to face these threats. The grid business is crucial for Iberdrola, which announced at its Capital Markets & ESG Day held on 9 November that it will allocate 57% of the total €47 billion in investments planned between 2023 and 2025 to this area (around €27 billion).

The improvement of distribution lines is the way to change the traditional way of supplying electricity unidirectionally - from the transmission grids to the consumption points - to one that acts as an intelligent and interactive platform. Thus, this infrastructure will be able to integrate more renewable generation, and provide greater capacity for new associated innovations, such as electric vehicles, self-consumption or the electrification of heat, among others.

The challenge has been launched within the framework of BiOK!, the meeting place offered by BEAZ (an entity of the Department of Economic Promotion of the Provincial Council of Bizkaia) for the generation of new business opportunities, in collaboration with Iberdrola's new smart grid innovation centre, the Global Smart Grids Innovation Hub.

Iberdrola has transmission and distribution power lines in the United States, Brazil, the United Kingdom, and Spain. This network consists of more than 4,400 high to medium voltage substations and more than 1.5 million medium to low voltage distribution transformers, built and operated to provide a high quality and reliable service to a total of 31 million electricity supply points.

The driving force behind energy startups
This year, Iberdrola celebrates 15 years of innovation in the energy sector through its PERSEO startup programme. This has helped the utility to launch innovative solutions to promote renewable energies, decarbonisation and electrification of the economy, digitalisation of grids, promotion of efficient storage and care for the environment. The initiative, with eight companies currently in its portfolio, has created a global ecosystem of startups over the years with an investment of more than €100 million.

Pilot projects give startups access to large volumes of data and real energy assets by testing their technologies in a real-world environment, while at the same time offering investment to startups with the highest growth potential. These two formulas provide insight into the market and access to key technologies first-hand.

Tell a friend:
We Team Up With Basque Startup Woza to Shield Our Power Lines from Climate Change