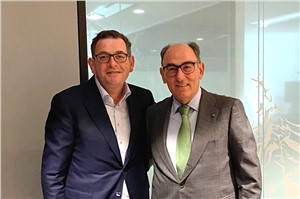 The Spanish company Iberdrola is taking another step forward in its international leadership in the energy transition to reduce dependence on fossil fuels. The company has committed to a major investment of between €2 and €3 billion in Australia with the aim of boosting the switch to renewables in the country and reaching 4,000 MW in the coming years. Iberdrola has already invested €2 billion in the country.

This announcement was made during the trip of Ignacio Galán, the company's Chairman, which began today in Melbourne, where he will hold meetings with key energy policy leaders and visit several of the renewable projects that the company is carrying out in the region.

"With these investments, Australia is consolidating its position as one of Iberdrola's key markets. The country's abundant wind and solar resources, as well as the pace of technological development, place this region in a privileged position. We will lead and accelerate its transition to an economy with green energy at its epicentre, with the aim of increasing the amount of electricity generated with renewables, which now represents around a third of its generation", said Ignacio Galán.

As part of this visit, this morning Iberdrola's Chairman, Ignacio Galán, met with the Premier of the State of Victoria, Daniel Andrews, and the Minister for Energy, Environment, Climate Action and Solar Housing, Lilly D'Ambrosio, and in the afternoon (Australian time) he met with employees of the Melbourne office.

Australia, a growing market
The electricity market in Australia is undergoing a profound transformation from a centralised generation system based on large fossil fuel facilities (coal and gas) to a system of distributed generation, primarily wind and solar power.

The transition of the electricity system to cope with a higher share of renewables is the biggest challenge facing the country. This challenge in turn presents enormous opportunities to help companies manage their energy costs, as well as to capture new sources of growth.

In addition to the huge pipeline of renewable energy and storage projects, there is strong residential demand for solar and battery technology. The main levers to ensure continued strong growth in renewable capacity are the upgrading of the transmission and distribution grid and reducing the cost of storage technologies.

In addition, opportunities are emerging for the economy as the country embraces new sectors such as green hydrogen, ammonia and green materials, as well as opportunities for innovation in offshore wind and storage.

Iberdrola, leader in Australia
Iberdrola has made a strong commitment to the Australian energy market since 2020 with the acquisition of Infigen Energy, Australia's leading renewable energy company. In addition to this major acquisition, the company has committed more than A$1 billion (around €700 million) to new renewable growth projects, such as the Avonlie solar farm in south-west New South Wales, the Flyers Creek wind farm in central New South Wales and the Port Augusta renewable energy complex in South Australia, the largest hybrid wind-solar farm in the southern hemisphere.

Similarly, in recent months Iberdrola has acquired the rights to the world's largest wind farm at Mount James, with 1,000 MW, the 360 MW Broadsound photovoltaic plant in Queensland and has invested in a smart solutions business, Autonomous Energy, which offers bespoke energy products for commercial and industrial companies.

With these investments, Iberdrola has a mature portfolio of more than 2 GW of development projects that will facilitate the consolidation of renewable energies as the main vector of the energy transition.

The company has currently installed 1,062 MW of renewables (wind, solar and batteries). In addition, it is building two new facilities with a combined capacity of 391 MW, which are scheduled for commissioning in 2023.

Underlying all these investments is a commitment to put customers at the heart of the energy transition, providing them with reliable, affordable and environmentally friendly energy. Industrial customers served by the company include some of Australia's most iconic brands, such as mining company BHP and supermarket chain Woolworths.

Earlier this year, Iberdrola set up its networks business in Australia, as the country's electricity grids, mainly transmission infrastructure, will need to be dramatically expanded to capture wind and solar resources and transport power to coastal population centres. Initiatives by the federal and state governments have created a climate of confidence for foreign investment to develop new renewable generation and transmission projects.

Tell a friend:
We Are Investing Nearly EUR 3 Bn in Australia to Lead the Energy Transition