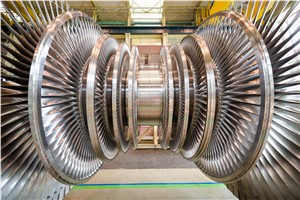 GE Steam Power signed a $165m contract with BHEL for the supply of three nuclear steam turbines out of six units for NPCIL’s domestic nuclear program- phase 1 being developed at Gorakhpur, Haryana (units - 1 to 4 (GHAVP)) and Kaiga (Kaiga-5&6) Karnataka, India.

This domestic program includes 12 units of 700 MWe being developed by NPCIL with their own nuclear reactor technology i.e., Pressurized Heavy Water Reactors (PHWR). In total, it will represent 8.4GW of CO2 free electricity for the country, enough to power more than 14 million homes.

In 2018, GE and BHEL had signed a business cooperation agreement and a License and Technology Transfer Agreement to enable them to manufacture nuclear steam turbines of 700 MW. Thanks to this partnership, the two companies are well positioned to respond to the country needs for lower carbon source of energy.

Supporting the Atmanirbhar Bharat initiative, the self-reliant India1* campaign launched by the government of India, GE will manufacture the nuclear steam turbines at its facility in Sanand, Gujarat in India. These turbines are being engineered and manufactured with an improved design for enhanced output that will meet the requirements of the customer.

Frédéric Wiscart, Nuclear New Build Leader for GE Steam Power, said “Nuclear energy is a critical and one of the most dependable sources of carbon-free power providing round-the-clock energy supply without interruption. At GE Steam Power, we are proud to partner with BHEL and to continue to support NPCIL and India in its path to reliable and lower carbon energy future. With our facility in Sanand, we have local manufacturing capability deliver on the nuclear aspirations of India domestic programme.”

Today, GE’s steam turbine technology operates in 50% of the world’s nuclear power plants, producing 200 gigawatts (GWs) for the global grid. GE Steam Power has supplied nuclear steam turbines in consortium with BHEL for the ongoing NPCIL projects at Kakrapar (KAPP) and Rawatbhatha (RAPP), that will deliver 2,8GW of CO2 free energy once completed.