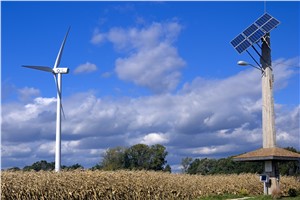 Hover Energy, LLC ("Hover") today announced it has entered into an agreement with Task Contract Solutions Limited ("Task") in which Task will be its exclusive partner in the sale, installation, and support of Hover Wind-Powered Microgrids™ in the United Kingdom.
Hover Energy and Task Contract Solutions partner to bring the Hover Wind-Powered Microgrid™ renewable energy solution to the UK market. Agreement opens the door for companies and government entities to accelerate their transition to renewable energy.

Hover and Task have been collaborating over the past year on several planned installations at exclusive, consequential sites, including projects for the UK Ministry of Defence. This agreement establishes a formal partnership and gives Task exclusive distribution and installation rights for the UK Market.

The Hover Wind-Powered Microgrid™ features a combination of wind and solar energy generation.   The centerpiece of the microgrid is Hover's patented 36kW wind turbine, which is roughly the size of a 10-foot shipping container.  Installed in an array on the windward edge of a building's roof, the system's aerodynamic design draws in and accelerates wind that hits the building.  A direct drive generator reduces friction and lowers the cut-in speed.  An adjoining solar photovoltaic array complements the turbines, generating power during daylight hours.  The energy captured by both sources is directed to an Integrated Energy Management System ("IEMS"), where the energy is combined, conditioned, and converted to three-phase AC power. The IEMS connects directly to the building management system.   Excess power, such as unused power generated at night, can be stored in electrical batteries for later use. The Hover Wind-Powered Microgrid™ has the potential to offset 100% of a building's power consumption when combined with solar photovoltaic technology and electrical battery storage systems.

Task has a track record of developing and delivering complex and challenging projects for public, military, and commercial clients across the United Kingdom, including the Reserve Army, BTFS, Spie Matthew Hall, Proctor & Gamble, CBRE, 2G Energy Ltd., and Openreach. Categories of work include renewable energy systems, specialist construction and digital installation projects, and both planned and routine maintenance programmes.

Ian MacVicar, Managing Director of Task, commented, "Task is dedicated to transforming the way people and businesses think about their power supply.  We are passionate in our ambition to help the UK make the big transition and ensure that renewable energy becomes the primary source of energy for the majority, not the few. Hover offers intelligent, groundbreaking technology and design which is perfectly suited for the UK commercial market. We are excited about our partnership with Hover. This new, green energy solution is a breath of fresh air, and we think it will be a game changer in the UK."

Hover's President and Co-Founder, Christopher Griffin, agreed, "We have been working alongside the Task team for quite some time and are impressed not only with the quality of their work, but with the character of their people.  We believe that successful sustainable development projects must begin with sustainable relationships.  Our skillsets blend brilliantly."