Denmark and Belgium to Connect Energy Islands With Undersea

Denmark and Belgium to Connect Energy Islands With Undersea Cable 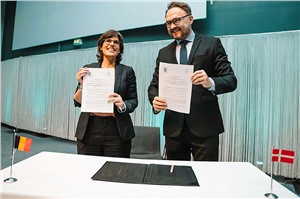 Grid operators Elia (BE) and Energinet (DK) are to collaborate further on the creation of a world-first: the first undersea connection between two energy islands, exchanging power between two countries, and bringing energy from offshore wind farms on land. Danish Climate and Energy Minister, Dan Jørgensen and the Belgian Energy Minister Tinne van der Straeten signed an agreement to build an interconnector between their energy islands at WindEurope’s annual event Electric City. German State Secretary at the Ministry for Economic Affairs and Energy Andreas Feicht also signed an agreement with the Danish Minister to connect the Danish island of Bornholm to the German grid.

The cooperation between Energinet and the German grid operator 50Hertz is also continuing. Both grid operators signed a memorandum of understanding to prepare for a second hybrid interconnector in the Baltic Sea. The cables would also be connected to offshore wind farms via a connection on Denmark’s Bornholm island. The project is now being further concretized.

Elia and Energinet are leading system operators in the development, construction, and operation of high-voltage marine infrastructure. Both have experience with subsea HVDC interconnectors (high voltage direct current) but are taking it a step further with this project. The preliminary study shows that the project will be technologically challenging, but that it is feasible. Once realized, the Belgo-Danish project will lead to an annual reduction of 4 megatonnes of CO2. Elia and Energinet are now going to further detail the plans and map out possible routes, landing points, and placement of conversion stations. The project could be completed by 2030. The construction itself will take about four years.

WindEurope CEO Giles Dickson said: “Offshore wind is entering a new era. Connecting offshore wind projects to more than one country will improve electricity flows across Europe. By pooling generation and transmission infrastructure these “hybrid” offshore wind farms reduce costs and save space. Today’s announcement from the Elia Group is good news for Belgium, Denmark and Germany – and for all of Europe. We will need many more of these hybrid projects.”

Tell a friend:
Denmark and Belgium to Connect Energy Islands With Undersea Cable