This news is classified in: Sustainable Energy Storage 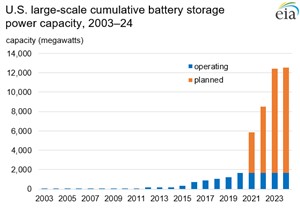 The United States continued a trend of significant growth in large-scale battery capacity, with U.S. battery power capacity reaching 1,650 megawatts (MW) by the end of 2020. According to EIA’s report, Battery Storage in the United States: An Update on Market Trends, U.S. battery power capacity grew by 35% in 2020 and has tripled in the last five years.

EIA expects the trend to continue; utilities have reported plans to install over 10,000 MW of additional large-scale battery power capacity from 2021 through 2023.

Much of the recent increase in new storage capacity comes from battery energy systems co-located with or connected to solar projects.

“Battery systems can help store electricity generated from solar or other renewables so that electricity is available at times when demand is peaking, but generation from renewables is lower,” Nalley said.

Five states account for more than 70% of U.S. battery storage power capacity as of December 2020, with California alone accounting for 31% of the U.S. total (506 MW). Texas, Illinois, Massachusetts, and Hawaii each have more than 50 MW of power capacity.

More than 400 MW of small-scale total battery storage power capacity also existed in the United States as of 2019, with California accounting for 83% of the capacity. Small-scale batteries have a nameplate power capacity of 1 MW or less.