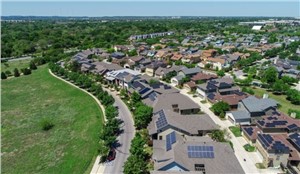 The economic, environmental and public health challenges posed by the coronavirus pandemic and the climate crisis in 2020 continue unabated as we usher in a new presidential administration. And yet utilities across the United States are expecting to spend more money with their guaranteed rate of return, which clearly means higher electricity bills. We have an opportunity to reimagine this centralized electricity system with innovation and smart planning.

Last year’s blackouts from Hurricane Isaias were yet another wake-up call that our centralized electricity grid is failing us. Who can forget Superstorm Sandy knocking out power to the Northeast, in some areas for over two weeks? In California, large swaths of the state are repeatedly plunged into darkness to reduce the risk of wildfires as utilities apply outdated tools, while overlooking the power of distributed resources to help fortify the grid.

As former regulatory commissioners, we are struck by how many policymakers and utilities believe doubling down on preserving the centralized system is the best way to repair the aging electric grid. We have long advocated for a new system that relies on more distributed energy resources spread across communities, but state commissions have lacked modeling tools that show the pathway for local energy resources, such as solar, batteries and geothermal, to benefit our electricity grid.

When planning for future resource investments, most utilities and regulators approach grid and system planning in silos, using tools and models that aren’t equipped to consider the total cost and benefits of distributed energy resources. This has been the case for many decades. For the first time, a team of researchers led by Christopher Clack looked at the holistic grid and incorporated local solar into grid and system planning. The model that Clack used calculated a least-cost development plan for the grid. The results are striking.

Here’s what their Local Solar Roadmap found: If we invest in local solar and energy storage and other distributed energy resource (DER) technologies — on schools, businesses, farms, apartments and homes — we can save  $473 billion on electricity bills between now and 2050. This means deploying at least 247 gigawatts of local rooftop and community solar over the next three decades, enough to power over 25 percent of U.S. homes.

This modeling disproves the old paradigms that claim DERs are too expensive. Continuing to invest in centralized solutions, without considering the contributions from new distributed technologies, will result in a costly energy system, with stranded and underutilized investments. And, as we all know, stranded utility costs are traditionally paid for by customers. It’s clear the needs of the electric grid are evolving to a more distributed energy future.

While this model looks to the future, people are already experiencing the benefits of distributed generation. Local solar saved New England residents $1.1 billion from 2014 to 2019 in the territory of ISO-New England. That’s not just residents with solar on their roofs — it’s everyone who pays a power bill. And the savings didn’t stop there: CO2 pollution was reduced by 1.4 billion metric tons, the equivalent of taking 1 million cars off the road for one year.

Local solar and storage also opens up access for people historically excluded from the clean energy conversation: low-income communities, which usually experience the worst health and environmental consequences from polluting fossil fuel power plants. Local solar should be accessible to anyone with an electric bill and can help to bring clean energy and cost savings to families in low- and moderate-income communities. Community solar and microgrids will help in this regard.

We can rebuild our economy and create a more cost-effective electric grid by investing in DERs, including distributed solar and batteries. This analysis shows that smarter, better modeling and integrating distributed energy resources offers the best value for ratepayers, utilities and regulators. We encourage utility regulators to require utilities and other participants to use these updated planning tools that can fully account for distributed resources, and optimize future grid investments. With regulatory innovation, we can reduce our dependence on fossil fuels, clean our air and put people back to work — all while fighting climate change.

Tell a friend:
Doubling Down on a Centralized Grid Is More Expensive Without Distributed Energy