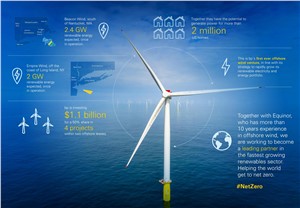 bp and Equinor today completed the formation of their strategic US offshore wind partnership. This includes bp’s $1.1 billion purchase from Equinor of a 50% interest in two major lease areas off the US East Coast. The new partnership will develop up to 4.4GW through two projects – Empire Wind and Beacon Wind – and together pursue further growth in the US offshore wind market.

The completion of the partnership follows the recent success of the Empire Wind 2 and Beacon Wind 1 projects in being selected to provide New York State with 2.5GW of power. This is the biggest US offshore wind award to date. Together with the existing award to supply 816MW from the Empire Wind 1 development, this represents a total commitment to provide 3.3GW of renewable offshore wind energy to the State of New York.

“Partnering with Equinor, we look forward to developing these world class assets in the fastest growing energy sector.  We will work with communities and authorities in New York to develop a leading offshore wind industry hub, including the South Brooklyn Marine Terminal and the Port of Albany. The partnership will continue to identify new opportunities elsewhere in the US and is committed to providing people with the energy they need in the way they want it.”

The partnership will leverage both companies’ capabilities and decades of experience in delivering projects on time and within budget, in some of the most challenging offshore environments. The staffing levels for the projects will evolve over time so that, once in operation, they will be staffed equally from both companies.

The Empire Wind lease area, awarded to Equinor in 2016, is 15-30 miles southeast of Long Island and has a total area of 80,000 acres. Its two phases of development have a potential generation capacity of 2GW. The Beacon Wind lease area covers a total area of 128,000 acres, approximately 20 miles south of Nantucket and 60 miles east of Montauk Point. When fully developed its two phases are expected to have a total generating capacity of 2.4GW.

Today’s completion is an important part of bp delivering its strategy and plans to become an integrated energy company.  Under these plans bp aims to grow its net renewable generating capacity from 2.5GW in 2019 to 20GW by 2025 and to around 50GW by 2030. It also aims to increase annual low carbon investment 10-fold by 2030 to around $5 billion a year.