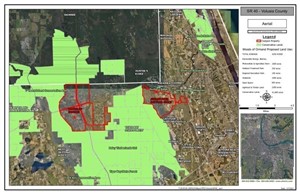 Avalon Park Group has formed an international consortium with Switzerland and Singapore based partners to bring a 300+ megawatt photovoltaic energy farm to Volusia County.  "Utilizing the abundant natural resource of the Sunshine State allows us to create a photovoltaic farm at a scale that will not only support the sustainability of the Avalon Park Daytona Beach Community, but also provides a renewable energy source for the entire region to utilize," says Beat Kahli, CEO, Avalon Park Group.

The company's vision to create healthy, sustainable communities' dates back 35 years to one of its first projects, the Comino Hotels in Malta, where solar energy was used.  Avalon Park Group has since been engaged in other sustainability ventures including timber, agriculture technology and other solar projects in Germany and Switzerland.

Additional sustainability plans include a biomass and agrivoltaic farm, an advanced wetland treatment park to assist in treating the excess greywater that has been a long-time regional issue.  Additional plans include an agrihood, timberland, regional recreational amenities, and additionally to ensure the preservation of existing wetlands and open space.

"Renewable energy in the form of photovoltaic is where the energy market is moving to," says Beat Kahli, CEO, Avalon Park Group.  "We are not entering this market in the US with our Swiss and Asian Partners because of a scarcity of fossil energies like gas, coal or oil, it is just an idea for which the time has come.  Similarly, the world didn't move out of the stone age because of the lack of stone, but because of the abundance of new and better resources."

This land enhances the sustainability plans of Avalon Park Group within Volusia County which currently includes plans for a compact, walkable, mixed-use and interconnected town where everyone can Live, Learn, Work and Play.