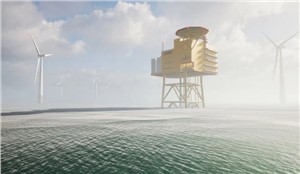 The European Union wants to build 40 gigawatts of green hydrogen electrolyzers by 2030, and estimates that 80 to 120 gigawatts of solar and wind will be needed to power them.

That’s a fresh headache for Europe’s grid operators. Decarbonization is expected to double the demand for electricity as transport and heat electrify directly as well.

Taking hydrogen production off the power grid could be a win-win solution to these problems. That’s the idea behind plans for ‘islanded’ hydrogen, which would pair electrolyzers with offshore wind farms and send hydrogen molecules, rather than electrons, back to shore.

The AquaVentus consortium, led by German utility RWE, is exploring the deployment of up to 10 GW of islanded green hydrogen by 2035 with the island of Heligoland as a central hub. That makes it the largest green hydrogen proposal on the drawing board thus far. Other AquaVentus partners include Siemens Energy, Vattenfall, Vestas, Siemens Gamesa and Shell.

AquaVentus dwarves the 4 GW plans in Saudi Arabia, although that project, in the new megacity Neom, plans to be up and running in 2025.

Industry will be a big source of demand for hydrogen, even more so in the early days. In Europe, that means clusters of demand in Belgium, Netherlands and Germany. Hydrogen piped back from AquaVentus would land downriver from the port of Hamburg.

The costs of transporting hydrogen from ocean platforms via pipeline may appear at first glance to be much greater than the costs of laying undersea transmission to carry electricity to shore. But that doesn’t take into account the cost of offshore substations to collect wind farm power, or the severely congested state of the onshore power grid. A massive coordinated effort will be needed to whip those grids into shape to absorb the rapidly growing amount of offshore wind power being planned.

In light of those challenges, piping hydrogen back to demand centers may make sense, particularly for a North Sea region that already hosts an extensive undersea pipeline infrastructure and deep industry experience in building it. So far, however, the earliest islanded hydrogen projects are starting small.

Earlier in December, Siemens Gamesa announced an islanded green hydrogen trial in Denmark that will start operations next month. An existing 3 MW turbine is connected to an alkaline electrolyzer, and hydrogen will be transferred to tankers for use in Everfuel’s hydrogen refueling stations. The Brande Hydrogen project 3 MW turbine will produce enough fuel for 50-70 taxis.

“Once a wind farm can produce hydrogen independent of a grid, you can place the wind farm where you find the strongest winds on good sites without concerns for grid availability,” Henrik Mortensen, senior business analysts for innovation and products at Siemens Gamesa, told GTM in an email.

“With the EU’s ambitions for green hydrogen production, it will be necessary to go to offshore wind. Here we see great potential in wind farms moving molecules to shore instead of electrons.”

Making the offshore hydrogen economics stack up
Another islanded hydrogen project in the U.K., dubbed Dolphyn, is proposing a 2 MW and 10 MW pilot for floating wind turbines with on-board electrolyzers. An analysis by ERM, the firm behind Dolphyn, showed the total lifetime costs of four different set-ups.

Two use floating turbines with electrolyzers, each using different floating foundations (single spar and semi-submersible). A third uses a central platform offshore for the hydrogen production, and the fourth simply runs the power back to onshore electrolyzers.

At all distances from the shore, 50 km, 100 km and 250 km, a semi-submersible floating turbine with on-board electrolyzers was the cheapest. Beyond 100km, the costs of high-voltage cables back to shore start to create a gulf in cost.

The Dolphyn project has led to the concept of islanded hydrogen being considered in National Grid’s Future Energy Scenarios (FES).

Rob Gibson is the whole system and gas supply manager for National Grid ESO. He and his team developed the emission, hydrogen and gas input for the FES scenarios. They consider a number of potential outcomes for the energy system with hydrogen an increasing area of focus.

Gibson describes the various envisioned outcomes as “credible extremes.” Its most ambitious, the Leading The Way scenario, sketches out a situation where the impending hydrogen economy uses all green hydrogen generated from renewable energy. Other scenarios rely more on “blue hydrogen,” or hydrogen made from fossil fuel feedstocks with the resulting carbon emissions captured and stored.

Skipping blue hydrogen for green?
With the 10 GW proposal from RWE and partners now out in the open, Gibson considers the momentum for green hydrogen to be growing, even though he personally thinks a combination of blue and green is more likely.

“It definitely adds a level of credibility around the potential for an all-green hydrogen future, and then skipping over, potentially the blue one,” Gibson said in an interview. As it stands, blue hydrogen is being presented by some as a “transition” fuel for green.

Of course, neither of these two technologies are proven at scale, making comparisons at this point a bit premature. Still, “there’s a view that we hear when engaging with the industry that by the time blue hydrogen is up and running, the cost of green hydrogen could be equal to it,” Gibson said. If that’s the case, “why would you invest twice?”