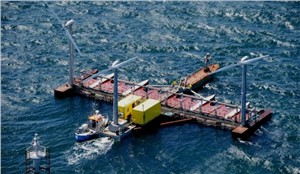 More than a dozen technology developers are looking to capitalize on the momentum behind floating offshore wind by adding other marine power concepts into the mix.

The companies, which include Floating Power Plant of Denmark, Marine Power Systems of the U.K. and Pelagic Power of Norway, are all pushing the idea of using floating wind turbine platforms for a variety of generation assets, from wind and wave to solar and ocean thermal energy.

Proponents claim that using a single floating platform for multiple technologies can help improve the energy yield per unit of area and thus reduce the overall cost of electricity.

“You’re making the best use of the capex you’re putting into structures out in the ocean,” explained Donagh Cagney, policy director at the industry group Ocean Energy Europe, in an interview. “You’re using the moorings, [and] you’ve got the grid connection. You’re getting more bang for your buck.”

A case in point is U.S.-based Excipio Energy, which has designed a floating platform called an Excibuoy that can accommodate wind, wave, flow, mooring energy and ocean thermal energy conversion technologies all at once.

The company claims an Excibuoy supporting a single 10-megawatt offshore wind turbine could deliver up to an additional 19 megawatts of power from these alternative energy sources.

Developers pursuing early-stage technologies, such as tidal and wave, seem particularly keen on hybridization because it offers a way of piggybacking on the cost reduction path of floating wind, which is still at an early stage but is regarded as having massive growth potential.

“It's clear that in order for less established technologies to achieve scale, they must innovate and look for all possible ways to reduce cost,” Sean Parsons, external affairs director for tidal stream leader Simec Atlantis Energy, wrote in an email.

“If the cost of supporting infrastructure and development could be shared with other local technologies, like floating wind, then this would be a great benefit to the projects and the continued development of these developing technologies.”

Tapping the energy of wind, wave, tide and temperature
Wave and tidal developers point to the fact that their technologies can complement offshore wind by delivering power during low-wind periods. Waves, in particular, tend to come after wind, so “you get a more balanced aggregate renewable power,” Cagney said.

Hosting multiple generation technologies on a single platform can help improve the utilization of grid connections and allow operations and maintenance costs to be spread over multiple assets.

But at the same time, adding multiple technologies to a single platform adds to the complexity of the structure. And it is unclear how much cost reduction can be obtained from stacking several high-cost generation assets on top of each other.

For this reason, most developers assume the main value from hybrid platforms will come from hosting a mature technology. This is typically offshore wind, but there are alternatives.

Sinn Power of Germany, for example, began life as a wave energy converter developer but is now touting a floating platform designed to occupy the space between offshore wind turbines, where up to 80 percent of generation will be from solar panels.

Sinn Power’s 5-megawatt platforms will also host wave energy converters and small-scale wind turbines, all equipped with power electronics systems that the company has designed for underwater use.

“I would be lying if I said that the LCOE of our technology today is lower than existing offshore wind,” he commented in an interview. “But the structure, as well as the renewable energy sources, follow a modular approach. We already have a very large number of mass-producible components, which result in economies of scale. From an installation point of view, we’re already competitive with large wind farm deployments.”

Such talk may seem premature given that floating wind itself is still in its infancy. The industry last week trumpeted a new milestone as MHI Vestas for the first time installed a 9.5 MW turbine on a floater, built by Principle Power.

But Sinn Power already has a prototype undergoing trials in the waters off Greece, and Floating Power Plant has tested a floating platform that can host up to 8 MW of wind turbines and 3.6 MW of wave power.

If these and other developers can get their hybrid concepts to work cost-effectively, then floating wind could become a catalyst for more than just wind power.