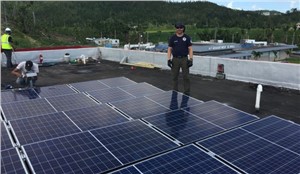 Some see rooftop solar panels and batteries as a business opportunity or a path to energy independence. For firefighters, these technologies pose new types of risk that they ignore at their own peril.

The rooftop solar industry is growing steadily, and now tens of thousands of home batteries are being installed every year in the U.S. But clean energy equipment rarely shows up in firefighter training. To fill in that gap, Captain Richard Birt, a 30-year veteran of the Las Vegas Fire & Rescue Department, spends his free time crisscrossing the West to provide training on safe solar and battery response.

“Electricity, just like water, is going to flow the easiest way possible,” Birt said at a training in late September. “Don’t let your body be the pipe.”

Solar and batteries can save lives, Birt contends, by keeping medical devices powered up during emergencies. Doing so reduces the volume of emergency calls that flood in when the power goes out. Birt has even used solar and batteries to restore power at fire departments in Puerto Rico after Hurricane Maria smashed the island's electrical grid in 2017.

Distributed solar and batteries are upending the centralized grid architecture of the last century, in other words. But they're also shifting the paradigm for firefighting.

“This has changed everything,” Birt said. “There are circumstances where the power goes out, but the power’s no longer out.”

Birt was leading a workshop at CalFire’s Riverside complex, addressing a few dozen responders who had just passed the Firefighter 2 exam and would deploy to fire lines as full-fledged professionals the following week. They're among the more than 1,000 firefighters he's trained with his Solar and Fire Education curriculum, spanning dozens of communities up and down the length of California. The hope is they'll spread what they learned across the state that leads the country in solar and battery adoption.

Size up the risk
Firefighters must recognize the different types of clean energy equipment they may encounter at house fires and take steps to neutralize any risks the equipment could pose to the operation.

At a traditional house call, that starts with turning off the flow of electricity from the grid, along with cutting gas and water. Once the “utilities are secure,” the team can proceed to rescue people and douse fires without risking electric shock.

These safety rules change when solar panels are involved. Firefighters who want to cut a hole in the roof to let smoke vent risk being shocked if their axes chop into a conduit carrying power from the solar array to an inverter or charge controller.

Covering the panels with a black tarp blocks the photovoltaic process, Birt instructed, making it safe to chop into the roof. But what if the solar panels are on fire? Just spray at least 100 to 150 gallons of water per minute through a 1.75-inch hose to put it out, he said. Solar output isn't strong enough to zap anybody through that water stream.

Burning batteries are another hazard. If a battery pack is on fire in a garage, firefighters should use the same hose arrangement to put it out safely. But they should also put on full protective gear, including a self-contained breathing apparatus, because burning batteries also release noxious gases.

Even after putting out a battery fire, the thermal runaway reaction in battery cells can cause reignition later. That means firefighters should keep dousing the batteries after the fire is extinguished to bring them back to ambient temperature. Once a battery pack has been dealt with, the homeowner should call up the company that installed it to have it safely removed, Birt said.

Utility-scale batteries: A whole different ballgame
Utility-scale batteries pose an altogether more potent threat, with racks and racks of battery cells packed into cabinets or containers. Fires at such facilities in the U.S. have been extremely rare, and they're equipped with self-contained fire suppression equipment to put them out when they do occur.

But in 2019, a utility-scale battery fire in Arizona led to an explosion that sent four firefighters to the hospital. That battery unit’s fire suppression system stopped the flames, but it allowed explosive gases to build up inside the container, which ignited soon after the responders opened the door.

That incident set off a series of investigations and prompted energy storage providers to include ventilation and other safety features to avoid a repeat.

Energy storage deployments are growing rapidly. Annual U.S. deployments will double in 2020, topping 1 gigawatt for the first time, according to data from Wood Mackenzie. This type of infrastructure is something firefighters will be seeing more of.

Birt’s advice is to liken battery plants to more familiar forms of high-voltage equipment, like transformer farms or the electrical vaults that supply power to casinos on the Vegas strip. Those are the province of utility experts.

“If you want to live, don’t go into the electrical vault,” Birt said, quoting the training for Las Vegas responders.

If firefighters encounter a large-scale battery fire, they need to fight the urge to take courageous action.

“There is nothing that you can do in there that’s going to mitigate that incident,” he said. “It’s just going to kill you.”

If a utility battery fire isn’t threatening any lives, firefighters should adopt a defensive strategy, Birt said. That includes marking off a perimeter, keeping people at least 50 to 100 feet away and preventing the fire from spreading beyond the battery installation.

The life-saving potential of solar and batteries
Birt, who retires this year from the Las Vegas fire department, doesn’t earn a salary for this work. His travel expenses are covered by Sunrun, the leading rooftop solar installer. The relationship stems from Birt's experience installing solar and battery systems in Puerto Rico after Hurricane Maria and has grown through his work training firefighters in a state facing massive wildfires.

“[Captain Birt] has watched firsthand how climate change is leading to more fires and putting a growing number of human lives at risk,” said Sunrun spokesperson Andy Newbold. “We know he firmly believes that we need to deploy more of this technology as quickly as possible, and we are 100 percent aligned with that vision.”

Sunrun also works with firefighters on developing building codes and permitting requirements, including the SolarApp initiative to digitize and automate solar permits, he added.

Solar and batteries can force firefighters to shift their tactics, but Birt is a solar and battery proponent. That's because he sees them as helping responders with their mission of saving lives.

Blackouts quickly become a matter of life and death for people who need refrigerated insulin, or an asthma nebulizer, or pumped oxygen to breathe. When those people lose power — whether from a storm or the utility-driven preventive power shutoffs that have become an annual routine in California — they call 911.

Backup power gives medically vulnerable households the power they need to take care of themselves. That, in turn, frees responders to handle fires or other emergencies.