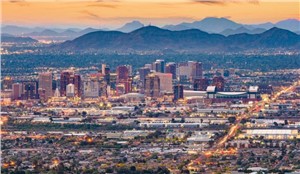 Arizona may soon join a lengthening list of states pledging to reach 100 percent carbon-free power by 2050, although a final decision on its plan to get there won’t be made until after Tuesday’s election.

Thursday’s 3-2 vote by the Arizona Corporation Commission approved a plan that’s been the subject of a months-long debate among regulators over the best way to renovate the state’s renewable energy mandates, which have been set at 15 percent of generation by 2025 for more than a decade.

The newly approved changes will boost those targets dramatically for investor-owned utilities Arizona Public Service and Tucson Electric Power, mandating a 50 percent cut in carbon emissions from 2016 to 2018 average levels by 2032 and a 75 percent cut by 2040. By midcentury, these utilities will be required to phase out all fossil-fueled generation.

“The climate crisis is impacting Arizonans right now,” ACC Commissioner Sandra Kennedy wrote in a prepared statement after the vote. Arizona experienced a record-setting heat wave this summer, and it and other states across the Western U.S. are facing bigger and more devastating wildfires. “I am glad the commission was finally able to look past partisan politics to support science and economics-based policy that stakeholders, utilities and ratepayers could all agree upon and benefit from.”

Tucson Electric Power plans to close its remaining coal plants by 2032 on its way to reaching 70 percent renewables by 2035, but it has yet to set a 100 percent carbon-free mandate. Sprawling municipal utility Salt River Project, which is not subject to the ACC’s regulations, plans to cut emissions by 62 percent by 2035 and 90 percent by 2050.

New targets for distributed storage, long-term renewables planning
The rules package approved by the ACC also comprises a number of amendments that will influence the mix of resources that utilities adopt to reach their carbon reduction goals. Those include a mandate that energy storage systems make up 5 percent of the state’s resource mix by 2035 and that 40 percent of that total be customer-owned or leased.

Arizona is already building hundreds of megawatts of batteries to store and shape generation from gigawatts of new utility-scale solar projects. APS plans to add 962 megawatts of renewable energy to its current 1,700 megawatts, as well as 850 megawatts of energy storage.

But Arizona utilities have also shifted rooftop solar compensation rules in ways that reduce the value of standalone solar but increase it for battery-backed solar. Adding a carve-out for distributed solar could drive the deployment of more than 200 megawatts of customer-owned or leased energy storage in the state by 2035, or about 40,000 home battery storage systems, according to the groups promoting the amendment, which included residential solar installer Sunrun, nonprofit advocacy groups Vote Solar and Solar United Neighbors, and the Arizona Solar Energy Industries Association trade group.

Both also plan to retain or expand their use of natural-gas-fired power for the capacity they will need to replace closing coal plants and meet load growth over the coming decade, although not at the levels contained in the plan that was previously rejected by regulators.

And an amendment passed earlier in October will boost the energy efficiency goals for investor-owned utilities to equal 35 percent of their 2020 energy demand by 2030, up from a previous target of 22 percent by 2030.

The package narrowly approved in Thursday’s vote must still be compiled into a final rule by ACC staff, which will then be voted on at a future meeting. If the final rule is passed by ACC commissioners — three of five of which are facing challenges for their seats in Tuesday’s election — it will be brought to the Arizona Secretary of State for a formal rulemaking process that will be open to public comment.

If established as state policy, the rule will add Arizona to a list of states including Hawaii, California, New York, Maine, Virginia, New Mexico, Nevada and Washington state that have set policies to reach 100 percent renewable energy or cut carbon to zero by 2050. Connecticut, Colorado, Illinois, Michigan, Minnesota, New Jersey, Rhode Island and Wisconsin are in the midst of debating similar mandates.