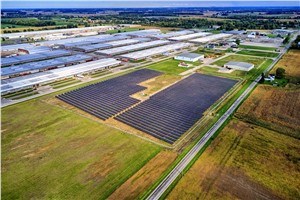 On a partly cloudy day in December of 2019, the mayor of Shelby, Ohio, flipped the switch that would add clean, renewable solar power to the town's power grid system. Earlier that day, engineers had finalized the testing needed to launch commercial operation of a new solar array, and over the last ten months, Shelby residents have been reaping the benefits of the renewable energy resource and a smaller carbon footprint.

Across the United States, more small towns are finding affordable and environmentally safe ways to generate power, and Shelby mayor Steve Schag was eager to lead in that trend. The town of about 9,000 has been moving away from its century-long reliance on coal and into an era of more sustainable options. "We need to be good stewards of the resources around us," Schag said, "We're very pleased that today, clean, low-cost, renewable energy is flowing through the lines here in Shelby."

The City of Shelby envisioned this project as an opportunity to set a new standard for sustainable power, while creating cost savings for its citizens. The City purchases 100% of the energy produced, and the solar array is expected to save Shelby ratepayers several million dollars over the lifetime of the project. Mayor Schag said, "Our citizens are very pleased, and rightly so, about what has been accomplished here in Shelby."

The project for the City of Shelby was custom designed and installed on a 14-acre site owned by the city. It includes 6,885 solar modules, mounted on a single-axis tracker that moves the panels to follow the sun throughout the day to maximize production. AEP OnSite Partners and URE also seeded the project area with pollinator-friendly plants to help restore and replenish the ecosystem by attracting honey bees and other pollinators important to Ohio agriculture.

United Renewable Energy's CEO, William Silva, reflected on the results: "We are honored to be a part of this project for the City of Shelby. With a great partner like AEP, it's not just about environmental impact, but equally important is the fact that solar gives Ohio towns significant cost savings and predictable energy costs in the future."