NSW to Call for Wind, Solar and Storage Proposals for Second Renewable Zone 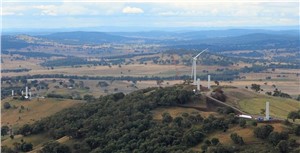 The NSW Coalition state government is preparing to announce the second phase of its renewable energy zone program, with a call-out for up to 8GW of wind, solar and storage projects in a new zone in the north of the state, including New England.

The announcement to be made by energy minister Matt Kean follows a phenomenal response to a call-out for the first renewable energy zone in the state’s central west. That sought 3GW of proposals, but the state government was swamped with some 27GW of wind, solar and storage proposals.

The push for these renewable energy zones signals a significant ramp up of activity and new investment in NSW as it prepares for the impending closure of the Liddell coal fired generators in 2023, and the closure of most of its remaining coal generators over the following decade.

It also underlines the reality that support for renewable energy in Australia is coming primarily from state governments, rather than the federal government. Ironically, much of the drive is coming from state Liberal governments, with NSW pushing into renewable energy zones, Tasmania aiming for 200 per cent renewables by 2040, and South Australia aiming for net 100 per cent wind and solar by 2030.

The creation of renewable energy zones also forms a central plank of the Integrated System Plan – the 20-year planning blue-print put together by the Australian Energy Market Operator as it seeks to outline the infrastructure needed for the clean energy transition, and for up to 90 per cent share of renewables by 2040.

The latest version of the ISP identifies the potential of 3.8GW in the New England zone and a further 4.5GW in the north-west zone. Combined, it says this will equate to around 8,000MW of new generation capacity – subject to the addition of more network infrastructure and a bigger transmission link to Queensland.

That modelling suggested that the new zone may not be needed until 2036, but with the growing expectation that the country’s coal generators will close sooner rather than later, this could be fast-tracked, at least partially. It will interesting to see what NSW has in mind.

NSW has already made clear that it wants to create three REZs, one in the central west, one in the north, and one in the south-west, near the proposed new link to South Australia, and is looking to develop a system where it will auction access rights to the zones, meaning that developers will help pay for the transmission and other network infrastructure needed.

These calls for expressions of interest in the central west REZ, and imminently for the north, are designed to test the appetite of renewable and storage developers.

In a recent interview with RenewEconomy’s Energy Insiders podcast, Kean spoke of his aim to turn the state into a renewable energy superpower, and said the state had been overwhelmed by the response to the first REZ.

“It was very exciting. Mostly it’s going to be wind, solar, hydro and batteries. But as I said, my focus is on delivering a transitioning of our grid to ensure that New South Wales citizens get access to some of the cheapest, most reliable electricity you’ll find anywhere on the planet,” Kean said.

Kean is currently travelling in northern NSW, where he has Tweeted a number of photos from visits in his role as environment minister.

Less happy are likely to be opponents such as the federal member for New England Barnaby Joyce, who has campaigned relentlessly against wind and solar power, and most recently compared wind energy to the failed attempts to use cannon as “rain-making” machines at the turn of last century. Joyce has said he would welcome, on the other hand, nuclear power in his electorate.

Joyce has been campaigning recently against the Nundle wind farm proposed in his electorate, but there are already several thousand gigawatts of proposals in the pipeline in his electorate, including the massive 4GW Walcha Energy project that is looking to combine wind, solar, battery storage and pumped hydro.

Barnaby Joyce may need a bigger shovel if the NSW government goes ahead with its renewable plans.

New England is already the location for two of the state’s biggest wind farms – Sapphire and White Rock wind farms, with the White Rock solar farm (see photo above). But the region remains relatively sparse in actual construction (see map below).

More enthusiastic will be his state counterpart Adam Marshall, the state member for Northern Tablelands, and a former renewable energy secretary in the NSW government and now minister for agriculture, who has previously voiced strong support for the development of renewables in his electorate. (

Tell a friend:
NSW to Call for Wind, Solar and Storage Proposals for Second Renewable Zone