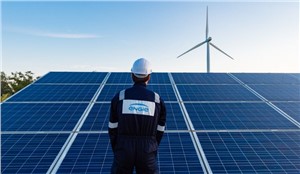 The North American arm of European energy giant Engie SA and climate-focused investor Hannon Armstrong announced Thursday they will partner on a 2.3-gigawatt portfolio of U.S. wind and solar projects slated for completion this year.

The two will split equity ownership of the Engie-developed portfolio, with that company maintaining a 51 percent majority interest and continuing to manage the projects. The portfolio includes wind installations in South Dakota, Kansas, Oklahoma and Texas as well as solar projects in Texas — where Engie’s North American subsidiary is based — and Virginia. Offtakers include big-name brands such as Target, Microsoft and Walmart, plus just one investor-owned utility: Minnesota-based Xcel Energy, which is working toward achieving 100 percent carbon-free electricity by 2050.

In April, Engie announced it had secured $1.6 billion in tax equity financing from Bank of America and HSBC for its 2-gigawatt portfolio still under construction in the U.S.

By the end of 2020, formerly fossil-focused Engie plans to have developed and constructed 2.3 gigawatts of renewables operating in the U.S., where in 2018 it had none.

“We’ve been through a big transformation over the past years in order to refocus our activity on renewables,” Gwenaelle Avice-Huet, CEO of Engie North America, told Greentech Media.

That transformation includes the acquisition of distributed solar developer SoCore Energy and large-scale wind builder Infinity Renewables. The new partnership between Hannon and Engie bolsters Engie’s promises to seek more renewables in the U.S., but it’s not the first time Hannon has put its climate-focused dollars behind the European power company. Earlier this year, Hannon, along with French investor Meridiam, provided investment in a public-private partnership for Engie’s 50-year takeover of the University of Iowa’s on-campus energy and water utility systems. Engie plans to transition the school to zero-carbon energy and cut out coal use by 2025. In 2018, Hannon provided a $50 million equity investment in an Engie portfolio of distributed corporate and industrial solar projects.

Avice-Huet cited the U.S. as a “key country” for Engie’s future growth as it steers away from fossil fuels and toward renewables.

Hannon Armstrong CEO Jeff Eckel told Greentech Media the investment will help the publicly owned Hannon diversify and scale its own investment portfolio, which has skewed toward solar in the last several years. Behind-the-meter projects in energy efficiency, storage and distributed solar currently make up the majority of its $2.1 billion portfolio, with grid-connected solar and wind also accounting for a significant portion of its investments.

A focus on corporate customers
Most of the power the Engie-Hannon portfolio produces will be sold to companies looking to increase their renewable electricity, such as T-Mobile and Amazon.

That focus guided both the resource mix and the location of the resources, said Avice-Huet. The 2 gigawatts expected for commissioning this year are in large part wind, with about 525 megawatts of solar. None of the projects come paired with storage, although Engie is beginning to build that technology elsewhere — in May the company won a bid to build a solar-plus-storage project in Hawaii.

Eckel said Engie's offering "is more ambitious and sophisticated than any other client we’ve seen" on both the demand and the supply side of providing clean energy to corporate customers.

The partnership would be a significant one even in a COVID-free world, but it is of particular note amid the prevailing investment uncertainty. Engie pulled its 2020 guidance earlier this year, citing the “unquantifiable” impacts of the pandemic. While much of Europe looks to have contained the virus, for now, it is still raging in the U.S. and particularly in Engie North America’s home state of Texas. Despite that, Avice-Huet said the sizable portfolio “demonstrates [that] the appetite of the market” remains strong.