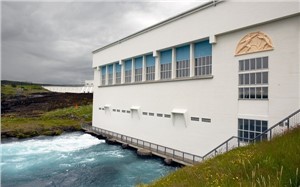 Landsvirkjun has started the process of developing a hydrogen production facility at the 16MW Ljósifoss Hydropower Station, about 70 km outside of Reykjavík. Landsvirkjun has presented the possibility to the District Board of Grímsnes and Grafnings District, who can decide whether to permit the facilities in their master plan.

“We would produce green hydrogen at Ljósifoss, through the electrolysis of water with renewable power,” says Business Development Manager Nanna Baldvinsdóttir. This carbon-free method of producing hydrogen is still too uncommon, with most of the world’s hydrogen supply currently produced from natural gas with its respective carbon footprint.”

The unit would be housed in a 700m2 building that would be adequate for maximum production at 10 MW, although the electrolysis will be built out in phases, increasing in capacity as demand increases. At full capacity, the station would produce enough hydrogen to power the Reykjavík area’s entire public transportation fleet.

The fuel of the future
Nanna says that because hydrogen, batteries and methane all have different characteristics, it is ultimately the needs of the user that determine which fuel is most suitable. “Hydrogen production is relatively simple compared to the production of other fuels. Although our staff will receive some additional training, we at Landsvirkjun already have the basic knowledge required.” During the process, electricity powers an electrolyser, which splits water into its two elements, hydrogen and oxygen.

Using hydrogen as a fuel has many clear benefits. Provided the electricity used to make hydrogen is renewable, it is virtually carbon free. It has minimal environmental effect and is carbon-free. It is lighter than air and rises rapidly if a leak occurs. Nanna states that one of the most appealing traits of hydrogen production to Landsvirkjun is the fact that production can be controlled to match the availability of power on the system. “Electrolysers are built to withstand varying production levels in accordance with both hydrogen demand and power availability, allowing the producer to adjust output levels to the needs of the market at any time.”

Despite hydrogen’s advantages, there are a number of difficulties to be overcome in its use. It is low in energy per volume, making it expensive to store and transport. Hydrogen is indeed flammable, so many of the safety rules applicable to oil and gas facilities apply to hydrogen as well. Hydrogen storage tanks are fortified to withstand shocks, and the transport of hydrogen is subject to the same strict and established safety regulations as the transport of oil and other flammable fuels.

4% of the fleet responsible for 15% of emissions
Once robust hydrogen production has started, many commercial players now have an option for decarbonisation that did not exist before. About 4% of Iceland’s automotive fleet is made up of commercial freight vehicles, which are the source of 15% of Iceland’s transport emissions on land.

In addition to being a suitable transport fuel, hydrogen can be used for electricity production and heating, and is a vital component in a number of industrial processes. This versatility, coupled with a reduction in development costs, has led to hydrogen enjoying a strong comeback globally. A number of countries, including the European Union and Japan have published their own hydrogen road maps, with plans for the widespread use of hydrogen on their energy systems and policy introduced to support such ambitions.

Nanna says that Landsvirkjun’s presentation to the board of the Grímsnes and Grafnings District on the potential production of hydrogen at Ljósafoss was the first step in seeing this facility realised. The 2008-2020 Master Plan for Grímsnes and Grafnings District has the area of interest designated as residential and would require resignation as industrial if the District wants to see the hydrogen facility developed there.