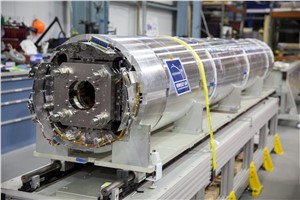 In a multiyear effort involving three U.S. national laboratories, researchers have successfully built and tested a powerful new focusing magnet that represents a new use for niobium-tin, a superconducting material.

The eight-ton device – about as long as a semitruck trailer – set a record for the highest field strength ever recorded for an accelerator focusing magnet, and raises the standard for magnets operating in high-energy particle colliders.

It is one of 16 they will deliver for operation in the High-Luminosity Large Hadron Collider (HL-LHC) at CERN in Europe, which is an upgrade of the existing LHC – already the world’s most powerful particle accelerator. The 16 magnets, along with another eight produced by CERN, will focus beams of protons to a tiny spot as they approach collision inside two different particle detectors. The U.S.-based team will also deliver four spare magnets.

In all, the upgrade will require 130 new magnets of 11 different types, produced by more than a dozen international partners. The project will replace about three-quarters of a mile of equipment at the LHC.

Niobium-tin is the ingredient that sets these U.S.-produced magnets apart. It is a superconducting material that produces strong magnetic fields. These will be the first niobium-tin quadrupole magnets ever to operate in a particle accelerator.

Superconductivity is a state achieved by extremely cooling the magnets to a temperature hundreds of degrees below freezing. In this state, the magnets can pass electrical current with virtually no electrical resistance in order to maintain a tight focus of the particle beams.

The LHC is already the planet’s most powerful particle accelerator, and its high-luminosity successor will smash together beams of protons cruising around the 17-mile ring at close to the speed of light.

The High-Luminosity LHC will pack an additional punch: With its more intense beams, it will provide 10 times the collisions that are possible at the current LHC. With more collisions there are more opportunities to uncover new physics. The new focusing magnets will help it achieve that leap in luminosity delivered to the experiments.

Berkeley Lab’s work is focused on winding wires into thin cables, measuring and analyzing those cables to ensure they meet exacting requirements, testing the quality of the magnetic fields generated by the cable-formed magnet coils, assembling the magnets into support structures, and ensuring their proper alignment and uniform compactness.

Giorgio Apollinari, head of the three-lab U.S. LHC Accelerator Upgrade Project and a scientist at Fermilab, said, “We’ve demonstrated that this first quadrupole magnet behaves successfully and according to design, based on the multiyear development effort made possible by DOE investments in this new technology.”

The new magnets, with higher field strength than those of the existing LHC, can bring particle beams to a tighter focus, resulting in more collisions that generate more data.