Redflow Batteries Deliver 24-hour Power and Save $10,000 in Diesel Per Year for Off-grid Wa Station 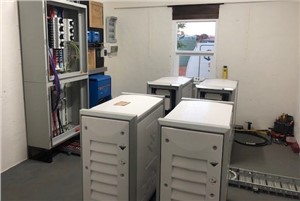 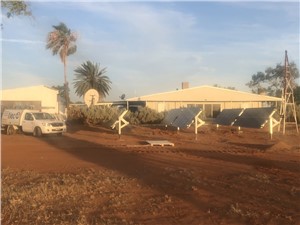 Yallalong Station, a 348,000-hectare cattle property 650km north of Perth, has deployed a Redflow battery-based energy storage system to boost its energy independence and save thousands a year in diesel costs.

The cattle station, in the dry Murchison region north east of Geraldton, can swelter for months in summer temperatures higher than 40 degrees Celsius – sometimes as high as 48 degrees Celsius.

Yallalong Station owner Lyndon Brown said a 24-hour power supply was essential to attract staff to work at this remote location. “If you want people to live out there in those isolated places, you do need 24-hour power to run all your fridges, air-conditioning and comforts of life that they expect,” he said.

“The nearest power grid is 150km away, so that’s not an option. We used to run our diesel generator two or three hours a day. which worked, but you can’t afford to run it 24 hours a day. So, at the end of 2019, we put in a Redflow-based energy storage system and that has made all the difference.”

Yallalong Station installed four Redflow ZCell zinc-bromine flow batteries and a 15kVA Victron Quattro inverter to store energy from 9.5 kilowatt/peak solar array. The system, which can store as much as 40 kilowatt-hours (kWh) of energy, enables the station to operate completely off-grid.

As well as providing 24-hour power, the $200,000 system, which will eventually include a three-kilowatt/peak wind turbine, will save Yallalong Station as much as $10,000 a year in diesel costs. It also avoids maintenance costs for the old diesel generator, which is now used just for backup.

Mr Brown said he had been interested in an energy storage system for a long time, but the technology was not suited to his requirements when he first looked at it. “Those lithium batteries are not designed for the specific purpose of giving you sustained energy over a longish period,” he said.

“They’re made for things like cars that need a big burst of energy over a short period. That’s their proper use. The beauty of these Redflow batteries is that they will give you a sustained energy supply over a long time.”

Mr Brown said an important benefit of Redflow’s zinc-bromine flow batteries was their tolerance of warm temperatures. “One of the big things about Redflow is I can have these units at Yallalong without having to air condition the room they are in,” he said.

“Redflow batteries can run at 50 degrees without any problems whereas with lithium batteries, you have to keep them in an airconditioned unit. When you’re off grid, having to air condition the room consumes a lot of the electricity that you want to save.”

Redflow’s Perth-based installation partner, TIEC Electrical, installed the energy storage system at Yallalong Station. “The heat tolerance and sustained energy storage of Redflow batteries make them ideal for the harsh conditions at Yallalong,” said TIEC’s Leith Elsegood. “I’m sure that the longevity and performance of these batteries in hot conditions will attract a lot more interest here in WA.”

Redflow CEO Tim Harris said the Yallalong Station installation, along with a six-battery site at a pastoral property near Roma in central Queensland, highlighted the ability of Redflow batteries to provide off-grid energy storage for rural properties. “These deployments demonstrate the ability of our zinc-bromine flow batteries to store and supply energy in the most demanding environments,” he said.

Tell a friend:
Redflow Batteries Deliver 24-hour Power and Save $10,000 in Diesel Per Year for Off-grid Wa Station