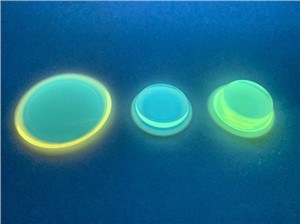 Quantum dots are extremely small fluorescent nanoparticles which are composed of between 10 to 1000 atoms and 0.5 to 9 nanometers in diameter. They are so small that one cannot see them with a typical microscope. The electronic characteristics of quantum dots are determined by their chemical composition, size, and shape. This means that we can control the color of light given off by a quantum dot solely by changing its size. Bigger dots emit longer wavelength colors, such as red, while smaller dots emit shorter wavelengths, resulting in the expression of such colors as green or blue. This means that light may be converted into nearly any color in the spectrum ranging from the UV to the IR region. Quantum dots also possess a very narrow half width and high quantum efficiency compared to ordinary solid fluorescent pigments.

Their applications could include:

This time, Dr. Ryohei Mori has created graphene quantum dot + silica based inorganic composite material. They had also confirmed that light fastness and heat resistance have been improved. With this technology, the weakest point of quantum dot, which is the light fastness and the heat resistance, have been improved and strengthened. This will open up the wide variety of real application.

Green Science Alliance Co., Ltd. also has other type of quantum dots such as ZnS, InP/ZnS, CdS, CuInS2(CIS), CuInSe2, CuInS2/ZnS, PbS, and AgInS2 etc. On top of that, they also have silicon quantum dots, carbon quantum dots and perovskite quantum dot. They may also challenge to create same composite material with these quantum dot as well in the near future.