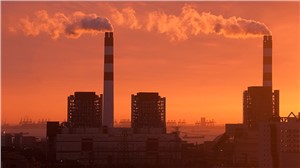 However, currently, carbon capture technology is only economically viable in cases where the CO2 can be sold and used by other industries, that is, referred to as carbon capture and use or CCU, but this limits the volumes that can be viably captured currently. In order for CCS (i.e. the storage option) to be more generally economically viable, we estimate that costs need to fall by ~50% from recent levels. This indicates that carbon capture capacity will be limited in the near term, as will its shielding effect on coal consumption.

On the one hand, China cut its primary energy intensity of GDP by 40% from 2005 to 2017 through energy efficiency policies and its stronger growth in services. On the other hand, coal's share of power generation reduced from 80% to 63% over the same period. Nonetheless, continued efforts to reduce carbon emissions, especially in the power generation sector, are required in order for the 2030 and 2050 targets to be achieved.

As illustrated in the graph below, to meet the target of limiting global temperature rises to 2ºC, as stipulated under the Paris Agreement, a conservative estimate for Chinese responsibility suggests that the carbon intensity of GDP needs to fall by 4–7%/y by 2030 and then by a further 3–12%/y between 2030 and 2050. This indicates that, up to 2050, Chinese carbon intensity needs to continue falling by at least the same pace compared with the past 15 years. Moreover, stricter constraints are likely to be imposed to meet the more onerous 1.5ºC target, as suggested by the 2018 IPCC special report. This suggests that harder efforts to control carbon emissions will be needed, which will likely require the development of new technologies.

Tell a friend:
CRU: Carbon Capture and Storage in China