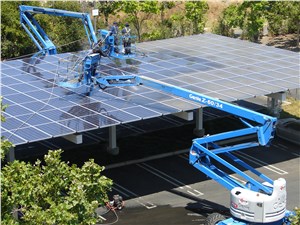 sPower, a prominent renewable energy provider, today announced its collaboration with Solairedirect, a growing solar company operating across four continents, to develop and own/operate solar photovoltaic (PV) projects in the US. The first initiative is sPower’s purchase from Solairedirect of a 26.5MWdc project named Adera. The utility scale project, near Fresno, Calif., in Madera County, will be designed and built by Solairedirect USA Inc. and then owned and operated by sPower.

Groundbreaking on the Adera facility is scheduled for 2Q 2015, with the commercial operation date (COD) expected mid-December 2015. The project has a 20-year PPA with Southern California Edison (SCE).

”We’re pleased to team with best-in-class companies like Solairedirect,” continued Creamer. “The Solairedirect group shares our vision to develop projects that not only move the renewables industry forward but that also support our community partners. The Adera facility will provide local jobs and economic benefits while supporting a sustainable future for the area.”

When fully operational, the Adera facility will generate enough clean, renewable energy for nearly 3,000 homes and is expected to reduce carbon emissions by more than 31,000 metric tons annually  the equivalent of greenhouse gas emissions from 75 million miles driven by an average car.