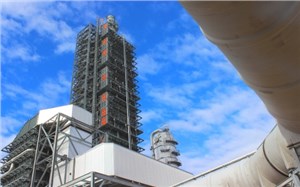 Sixteen-foot diameter ductwork takes flue gas from the coal plant to the carbon caption facility where the CO2 is removed from the flue gas by the amine solution in the tall absorption tower and then separated from the amine as 99.9% pure CO2 in the smaller regenerator tower to the right before being compressed and delivered to the oil field.(Photo: Business Wire)

“Completion of the Petra Nova project is an important milestone in our quest to help ensure reliable, affordable and increasingly cleaner energy from fossil fuels,” said Mauricio Gutierrez, President and CEO of NRG Energy. “This project represents another major step in NRG’s effort to reduce our carbon emissions and create a more sustainable energy future, and we are proud that this accomplishment was achieved on-budget and on-schedule in a competitive energy environment. I want to thank our partners at JX Nippon, Hilcorp and the U.S. Department of Energy as well as the State of Texas, our contractors and lenders for their commitment to the successful completion of this landmark project.”

Petra Nova first captured carbon dioxide (CO2) on September 19, 2016 and has delivered more than 100,000 tons of captured CO2 to the West Ranch field through an 80-mile pipeline. Final performance acceptance testing on the facility was completed on December 29, 2016 and the facility turned over for operations. During performance testing, the system met all performance criteria including capturing more than 90% of CO2 from a 240 MW equivalent slipstream of flue gas off an existing coal-fueled electrical generating unit at the WA Parish power plant in Fort Bend County, southwest of Houston. At this level of operation, Petra Nova can capture more than 5,000 tons of CO2 per day which is the equivalent of taking more than 350,000 cars off the road.

“JX Nippon is very pleased to see the construction of the Carbon Capture System completed and operations commencing as planned, thanks to the great effort made by the Petra Nova team,” said Shunsaku Miyake, President and CEO of JX Nippon Oil & Gas Exploration Corporation. “We believe this project will contribute to significantly increasing incremental crude oil production from legacy oil fields and also will be a major step forward in helping to decrease CO2 emissions globally.”

Construction on the Petra Nova project began in 2014 with a goal to be operational by the end of 2016. With construction completed, on-budget and on-schedule, the Petra Nova carbon capture facility has achieved this goal.

“NRG and JX Nippon’s Petra Nova is the type of innovative, technologically advanced project that proves time and again that Texas is the world leader in energy innovation,” said Greg Abbott, Governor of the State of Texas.

Hilcorp Energy Company (Hilcorp), the operator of West Ranch oilfield, will use the captured CO2 to boost production at West Ranch oilfield, jointly owned by NRG, JX Nippon and Hilcorp. Both Hilcorp and the University Of Texas Bureau Of Economic Geology will monitor the movement of CO2 deep in the oil reservoir. Over the next few years, oil production at the field is currently estimated to increase from approximately 300 barrels per day before beginning Enhanced Oil Recovery (EOR) operations to production of up to 15,000 barrels per day using captured CO2.

“To date we have drilled nearly 100 new wells in the West Ranch field and have implemented a robust CO2 and ground water monitoring program,” said Jeffery D. Hildebrand, Chairman and CEO of Hilcorp Energy Company. “We are excited about this project, and expect to see a meaningful increase in oil production at West Ranch in the near future.”

Petra Nova is 50-50 joint venture by NRG and JX Nippon. Additionally, the United States Department of Energy (DOE) is providing up to $190 million in grants as part of the Clean Coal Power Initiative Program (CCPI), a cost-shared collaboration between the federal government and private industry. A portion of the project was financed with project loans from the Japan Bank for International Cooperation (JBIC) and Mizuho Bank, backed by Nippon Export and Investment Insurance (NEXI).

Petra Nova uses the KM-CDR Process®, jointly developed by Mitsubishi Heavy Industries, Ltd. (MHI) and the Kansai Electric Power Co., Inc., and employs a proprietary KS-1 high-performance solvent for the CO2 absorption and desorption. The carbon capture facility was constructed under a fixed-price contract by a consortium of Mitsubishi Heavy Industries Americas, Inc. (MHIA) and TIC (The Industrial Company). At peak construction, over 500 people were working on the project.

In addition to Petra Nova, NRG is helping to build a lower-carbon energy future in multiple ways including a growing renewable energy portfolio, the development of fast start, flexible natural gas turbines, which are low carbon in their own right and help to integrate renewables into the grid, and coal to gas conversions and additions. NRG operates more than 7,000 megawatts of fast start natural gas and has modified more than 2,780 megawatts of older coal-fueled steam generation to use cleaner burning natural gas, reducing their carbon intensity roughly by half. These efforts are the foundation of NRG’s commitment to achieve NRG Energy’s carbon reduction goals of 50% by 2030 and 90% by 2050.

NRG, JX Nippon and Hilcorp expect to host a ribbon cutting at the site in the first half of 2017.