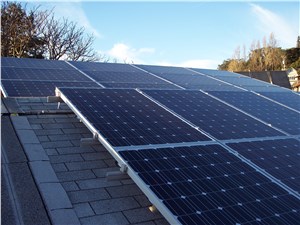 Upon completion, the 49-megawatt (MW-AC) Kawailoa Solar array will be the state’s largest solar facility, providing electricity at 10.99 cents per kilowatt-hour (kWh), assuming application of the estimated Hawai‘i state tax credit. The agreement must now be approved by the Hawai‘i Public Utilities Commission.

Kawailoa Solar will be located on Kamehameha Schools-owned land near Hale‘iwa, adjacent to the 69-MW Kawailoa Wind farm that has provided as much as 10 percent of O‘ahu electricity needs since 2012.

In January, Hawaiian Electric filed PPAs for the 14.7-MW Lanikuhana Solar and 45.9-MW Waipio Solar facilities for regulatory approval. The Lanikuhana, Waipio and Kawailoa projects, to be built and owned by NRG, are targeted to come online in 2019.

The three solar projects were originally proposed by SunEdison and acquired by NRG at the end of November 2016 during SunEdison’s bankruptcy proceedings. In February 2016, Hawaiian Electric terminated original PPAs for the three projects due to SunEdison missing contract milestones and its financial condition.

Newly negotiated prices in the 22-year agreements are below previous SunEdison prices.

“Reaching this agreement on Kawailoa Solar is another big step in our renewable energy plans for O‘ahu,” said Alan Oshima, Hawaiian Electric president and CEO. ”Our goal is always to bring better value to our customers, who will now get the benefits of lower prices for clean, renewable energy over the life of our contracts.”

commitment to diversifying its electric generation and providing customers a range of renewable energy solutions.

“Partnering with Hawaiian Electric on Lanikuhana, Waipio and Kawailoa is a proud moment for our company,” said Craig Cornelius, president of NRG Renewables. “We’re looking forward to moving ahead with construction and bringing the projects online as soon as possible.”

Hawai‘i ranks among the top states in installed solar capacity, according to the Solar Energy Industries Association, with a blend of residential, commercial and grid-scale projects.